Murray and Sexton at 50: The inside story of Ireland's winning partnership 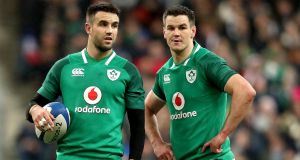 Conor Murray and Johnny Sexton are the most decorated Irish half-back pairing ever in international rugby. Photograph: Dan Sheridan/Inpho

Teams evolve. So it was that when the Grand Slammers of 2009, Brian O’Driscoll and Paul O’Connell et al, retired, it turned out not to be the end of the world, or even the end of Ireland as a major force. Their achievements assuredly contributed to the baton being passed on, but greatness had to emerge in their absence, and it has.

James Ryan and Garry Ringrose are exceptional international players, perhaps on the verge of greatness, while world-class players emerged elsewhere, not least at half-back.