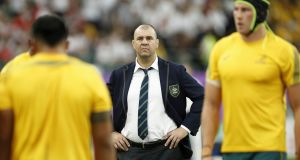 Michael Cheika has insisted he had no choice but to resign after Australia were dumped out of the World Cup by England.

The former Leinster and Stade Francais boss has stepped down as Wallabies head coach in the wake of Saturday’s 40-16 thumping in the quarter-finals.

The 52-year-old admitted he had to resign after pledging to the Australian Rugby Union (ARU) that he would quit if the Wallabies fell short of their World Cup potential.

Cheika angrily refused to answer questions about his future in the immediate aftermath of Australia’s hefty loss to England, but only a day later he has confirmed his tenure is at an end.

“At the time I wasn’t keen to answer but I always knew the answer in my head,” said Cheika. “I wanted to speak to my wife and tell a few people I care about.

“I put my chips in earlier in the year, I said ‘no win, no play’, so I’m the type of person who will always back what he says.

“I knew from the final whistle, but I just wanted to give it some time to settle down. I have no regrets about making the call, but yes, I would love to stay on.

“We have a lot of pride and a lot of honour, but I made my call.

“I wanted to show I was prepared to put myself on the line to achieve what I believed the team could and we didn’t do that, so I’ve got to stand by what I said.”

Sydney-born but of Lebanese descent, Cheika made his name as an uncompromising back-rower at Randwick, where he forged a close bond with current England boss Eddie Jones.

Cheika made his fortune away from the game in a clothing business specialising in jeans, and he has now admitted he has no need to remain in rugby.

Asked whether he will seek a return to top-level coaching, Cheika said: “I don’t know, I haven’t thought about it to be honest.

“It will be very hard to replicate the thrill and excitement of coaching at international level to be honest.

“I’ve never coached as a job, only for the pleasure. I haven’t really thought about it, so I’ll see what happens next.

“I’m not swayed by many things, as long as I know I’m doing my absolute best, leaving no stone unturned to prepare the team but also representing the game for the whole country.

“I tried my absolute best to do that. I’ve loved every minute of it so there’s no emotional toll.

“I’m no drama queen. I love the ups and downs, and that’s the way it rolls. I’m no finger-pointer. I think I’m half-and-half for wins which isn’t too dissimilar across the board.

“I’m not looking for an excuse there or an excuse here. I’ve tried to make the best of every opportunity I’ve been given. We weren’t able to deliver consistency over the whole time.

“We had some great moments, that comes with part of the challenges we’ve got around losing players overseas, young players coming through.

“But at the end of the day that’s pretty irrelevant, it’s all about trying to do the best you can in any given situation. Our best wasn’t good enough in this tournament.”

Rugby Australia chief executive Raelene Castle said in a statement: “On behalf of Rugby Australia, I want to thank Michael for his dedication and service to the role of Wallabies head coach since taking up the position in 2014.

“Michael is a passionate and experienced coach who worked tirelessly to get the best out his players. He cares deeply about the Wallabies and the game of rugby, and always set out with the aim of making Wallabies fans proud of the team’s performances.”

Tuilagi case shows England’s home-based clause is out of date 16:48
Cam Newton broke the mould: Can his flame be rekindled at the Patriots? 12:12
Pete Sampras: The forgotten great with the best serve in the business 11:10
Simmons: England West Indies series a blueprint for cricket 10:17
Different Strokes: Frankie leaves Fleetwood for Hollywood 10:00
Crossword Get access to over 6,000 interactive crosswords