Rugby World Cup: Ireland look to defy logic against the All Blacks 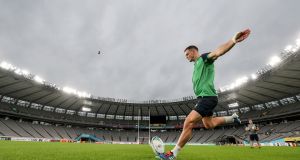 Kick-off: 11.15am Irish time, Saturday October 19th
Venue: Tokyo Stadium
How to follow: The Irish Times liveblog will begin at 10.30am
On TV: Live on RTÉ2, Eir Sport and ITV

This it then, the big one, maybe even the biggest of them all. For Ireland to boldly go where no Irish team has ever gone before, not only will they have to be bold, but they will have to probably produce the greatest one-off victory in history. That’s all.

The Green Army have begun arriving in force, and among the well-thronged narrow streets and tiny bars of the Golden Gai on Friday night, in contrast to home, there was an almost giddy air of optimism, which was not entirely fuelled by beer and sake.

In Friday’s chillier temperatures and rain, many were in the tranquil forest of the Meiji Jingu, a shrine to Japan’s ancient Shinto religion. At the heart of the inner garden, many of those Irish supporters were visiting the main shrine building, outside of which was a camphor tree.

Visitors could buy an ema, a wooden tablet, and write a wish list with the tables and pens provided, and hang it one of the hooks which encircled the tree. Most were written in Japanese, and of those in English, happiness, health and family were the overwhelmingly common themes, save for one which simply read: ‘Ireland 28 New Zealand 21.’

Hope was definitely in the air, for another read: ‘Mayo for Sam’.

Yet perhaps it was also mingled with fear. For four of the quarter-finalists, this weekend will mark the end of the road, not only of the 2019 World Cup but in some instances for playing and coaching careers. It’s both a threat and a source of inspiration, and for many of the supporters and vast media throng as well.

Akin to golf’s third round, this is the World Cup’s moving weekend.

The threat is all the more real against the back-to-back world champions. Not only have they never lost a pool match, they have won seven of eight quarter-finals, and excluding third-place playoffs, have won 14 of 19 knockout ties.

By contrast, including a quarter-final playoff, Ireland have lost all seven knockout matches.

Then there’s the task of keeping the All Blacks’ array of game breakers in check.

“They all have great attitudes, they’re all open to new ideas,” said the former Crusaders coach Ronan O’Gara, who has coached a quartet of these young backs.

“Sevu Reece scores tries. That’s what he does. He’s an instinctive player. Richie Mo’unga has deadly acceleration and wicked power. He’d be a massive squatter in the gym. Serious leg strength and power.”

Jack Goodhue? “Work-rate and a massive engine. Does the simple things well. Very intelligent, very mature for a young player but still raw.”

Mo’unga’s move to 10 and the brilliant Beauden Barrett to 15 means Ireland’s accuracy in possession will have to be unrelenting given the All Blacks’ unrivalled capacity to transition from defence to attack.

“There’s few people in the world, in any sport, like Beauden Barrett, who makes a sport enjoyable,” said O’Gara. “There’s been very few players who play rugby like him, with his acceleration and his spatial awareness.”

But if any defence can somehow keep these potent All Blacks relatively in check, it is one designed by Andy Farrell.

This has been an up and down World Cup at the end of an up and down 2019, but 2018 wasn’t a dream. It can still stand for something within the Irish squad this week.

They may not have been on a consistently upward curve at this World Cup, but not only will they have benefited from Fukuoka and the win over Samoa, they did not look fatigued physically. They arrive with all their key men, most of all Conor Murray and Johnny Sexton, in health and in form. This is a team designed for a one-off cup tie.

The All Blacks have a phenomenal bench, but Ireland also have a cast of replacements designed for impact in the set-piece, in ball carrying and collisions, and X-factor in Joey Carbery and Jordan Larmour.

Ireland are due a big performance and there could well be one coming. The first five or 10 minutes will reveal much. When taking the game to them in Chicago or withstanding an initial siege in Dublin last November, Ireland drew belief from big plays early on, with their energy and line speed forcing errors.

Nigel Owens has a big role and you share Steve Hansen’s wish that the game is not influenced by cards. Ireland’s discipline has been better in the last three meetings, when the All Blacks’ concession of penalties gave Joe Schmidt’s team timely access, and may well be again.

But it’s one thing trying to somehow keep the All Blacks in check, it’s another again scoring tries against them.

Cue the Schmidt factor, for there is also the nagging suspicion that Ireland haven’t shown their full hand yet, and that they’ll have a few new trick plays.

As Andy Farrell has said, Ireland will need to score points, and O’Gara concurs: “Ireland have to get their attack right. They’ve got to score tries. It sounds simple, but it’s going to be fascinating to watch.”

But all Ireland may need is for one or two of those trick plays to work.

Shane Lowry, a keen rugby fan, addressed the squad at their hotel out in the Chiba prefecture adjacent to Disneyland. He need only recall his mindset in the back nine of his moving day at Portrush, and holding his nerve on the last, to further fuel their belief.

This week also marked the third anniversary of Anthony Foley’s passing, and out by Disneyland this week the Irish squad have been on the periphery of the Magic Kingdom.

Like records, history can be broken and logic defied.

1 The Offload: Ireland are stuck in no man’s land
2 Nicky English: Galway and Waterford face battles with fatigue in All-Ireland semis
3 Crowds of 4,000 to return to sporting events in England from next week
4 Every kind of wind imaginable was against Tipperary football - and they came through
5 Tipperary and Cavan deliver two earthquakes in one day
Real news has value SUBSCRIBE