Joe Schmidt: ‘Heartbroken wouldn’t be too far away from how I feel right now’ 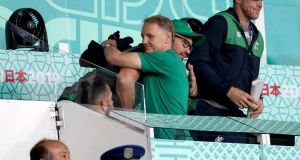 A “devastated” Joe Schmidt did his best to explain why Ireland produced such a poor, error-strewn performance in their biggest match for four years while an emotional Rory Best tried to come to terms with such an anti-climactic end to his playing career.

Ultimately the ripple effects arising from the defeat by Japan were still being felt in this misfiring performance which will have been equally devastating for all concerned in what had hitherto been such a high achieving scrum.

When the dust settles, there’s no doubt that Schmidt’s six and a half years with Ireland, on top of his three with Leinster, contained many more highs than lows, but this one will haunt him and the players more than any.

“You tend to carry your scars a lot more than your successes and those scars are deep. That’s why I’m a little bit broken,” said Schmidt.

“I think when I get some distance to reflect on maybe 75 Test matches and we’ve won 74 per cent of them, there’s been some incredibly good days.

“I don’t think they get washed away by two defeats in days where we are incredibly disappointed. I felt we had good reason four years ago when we lost our leadership before the quarter-final. Today, we just met a team who I think are number one in the world for a reason. If you’re not on the money you’re going to be incredibly disappointed and I am.”

That pool defeat by Japan pitched them into a quarter-final against the All Blacks, and the back-to-back champions ramped up their level of performance as they did in the quarter-finals four years ago to thrash France by 62-13.

Ireland weren’t as bad as that French team here, but the scale of the defeat had echoes of the loss at the same stage by France in 2003, when Ireland trailed 27-0 at half-time before losing 43-21.

As brilliant as the All Blacks were – Sean Fitzpatrick rating it their best in four years – if the truth be told on this evidence Ireland would again have struggled to beat any of the quarter-finalists here. In something of a horror show which deflated the huge Irish crowd, whatever could go wrong did.

“I don’t really have an excuse for it or a reason for it,” admitted Schmidt of Ireland’s high error count which contributed to 17 turnovers. “On the night we can’t afford to give the All Blacks access points like we did. They’re good enough to win games without us inviting them in and that was incredibly disappointing.

“I think we were a little bit flat on the back of having a few niggles during the week. We weren’t quite sure what the team would be until Thursday.

“I felt that we needed to get off to a good start to build a bit of confidence, and when that didn’t happen I always felt that we would be a bit vulnerable,” admitted Schmidt, who highlighted the “really disappointing” concession of a third try to leave Ireland 22-0 down.

“We had a really good space for Keith Earls on the trail line and a little bit of space on the overlap for Jacob Stockdale. We just didn’t quite put things together. We spilt that ball and on the back of it the All Blacks scored.

“They didn’t really have to earn that. They finished it off really well but those are the frustrating things, because you’ve got to make the All Blacks work for everything if they’re going to get it.

“I felt that in the past we had forced them to do that, even when we lost to them and certainly when we beat them. So that made it very tough, and then we were chasing the game in the second half, and if you’re chasing the game against the All Blacks and you’re not absolutely nailed on, you’re going to allow them opportunities. And that’s exactly what we did,” said Schmidt, who also cited conceding an attacking lineout when Jacob Stockdale’s foot in touch.

In the heel of the hunt though, the belief that this Irish team could extract a performance from the 2018 memory bank proved misplaced, and this defeat proved the final irrefutable evidence of the decline this year.

“I think there’s always a myriad of factors,” in seeking to explain why this is so. “I do think when you hit a height there is always a little bit of a drop because it’s not perfect. We work with human beings and inevitably when you’re reached a height there is, certainly not complacency, but there was an unfortunate, I suppose, aiming up for this tournament.

“One of the things we tried to do was experiment a little bit in the Six Nations, give some responsibility to a few younger players, try to build the group. We tried to use the Six Nations as a platform for that because we had won three of the last five of them that this is really what we wanted.

“And so that’s why it’s so devastating, that what we really wanted, we didn’t produce the performance that we needed on the night and while there might be reasons for that, with the short week that we had and the niggles that we had, so that we weren’t quite as regenerated as we would have liked to have been.

“That error count isn’t [normally] reached and that does make it incredibly hard. I don’t really have a reason for that, other than on the night there was always anxiety, there’s always guys who might over reach and as a result you don’t get the performance that you’re looking for.”

In this, the baggage of history and the failure to go beyond the quarter-finals overtly fuelled the team’s desire and/or fear of failure, and for all the disappointment among the supporters here and at home, one can only imagine how all involved in the squad feel.

For all that this team has achieved in the last World Cup cycle, Schmidt conceded reaching a semi-final “continues to remain elusive so we’re incredibly disappointed”.

“Heartbroken wouldn’t be too far away from how I feel and how the players feel right now. Because right after the November series when we played the All Blacks last year we decided to make sure that this was our target. Maybe it consumed us a little bit and we got distracted from our game to game focus.”

Ireland’s game has clearly not evolved sufficiently since the end of last year, witness the 16-2 offload total, although in comparison to four years ago, Schmidt maintained otherwise

“I think we demonstrated that in the intervening four years. There’s no team that we haven’t beaten and we’ve pretty much beaten every team at their home, apart from the All Blacks. We’ve beaten them in a neutral venue so I think it’s a performance tonight that we’re really disappointed with, I don’t think it’s as good as we can put out there.

“As I’ve said, I have huge respect for the All Blacks. I started watching them when I was three or four years old and supporting them. Certainly, the group of men I’ve worked with, it’s disappointing that they didn’t quite get their best foot forward tonight. But I thought it was a really impressive All Black performance.

“When you look at other teams, I think Australia offloaded every bit as often as the All Blacks do and they were beaten 36-0 the last time they played the All Blacks. They were in a similar sort of mood so you don’t need to be too far off the margin to receive an accumulation of points against a team of that quality.

“I think we did actually have a couple of chances to get access points but we gave the ball straight back to them so we didn’t really get the chance to express ourselves because we just weren’t accurate enough.”

1 Paul Stirling’s heart over head decision to play on for Ireland bears fruit
2 Leo Cullen says rotation will be key as Leinster look to keep on winning
3 Owens’s comments increase tensions ahead of FAI senior council meeting
4 Sporting Cathedrals: Le Stadium - European fortress of the mighty Toulouse
5 America at Large: When not taking one for the team is the wisest course of action
Real news has value SUBSCRIBE