Steve Hansen profile: Gaining rugby wisdom at every turn along the road 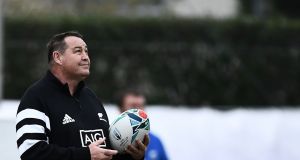 New Zealand head coach Steve Hansen at the captain’s run on Friday ahead of the Rugby World Cup quarter-final against Ireland in Tokyo on Saturday. Photograph: Anne-Christine Poujoulat/AFP via Getty Images

Steve Hansen is a horse whisperer.

“There was no way I could bully it,” he once said about a feisty nag. “I had to take my time with it and watch its body language. It was a really interesting process to learn from.”

This former police constable has been moulded, softened even, by 15 years as All Blacks coach. Eight as the chief. The Tao of ‘Shag’ is to gain wisdom from the behaviour of other sentient beings.

His latest gift to the quote gods stemmed from a question about Jacob Stockdale’s eternal try. It was put to Hansen that the origin of last November’s rip-roaring score in Dublin – a flawless bait and switch with Johnny Sexton dangled in front of them – originated on Hansen’s childhood paddocks, up Otago way.

Like a great white, Hansen torpedoed to the surface, taking an enormous chunk off the question with serrated teeth before disappearing into the deep.

“We know that Joe does a lot of study. That can be a strength and a weakness. I might be able to set him up.”

Where will Hansen resurface? Japan, seemingly, with Toyota Verblitz in Nagoya, as Kieran Read comes along for the lucrative ride. Hansen and third wife Tash’s mansion in Prebbleton, outside Christchurch, goes up for auction, for an asking price a cool €1.5 million, the day before the World Cup final.

Hansen has done good but it goes deeper than that. His is a generational success story. Way before the 60-year-old rode Graham Henry’s coat tails into the Wales job and succeeded him back home in 2012, coaching rugby was in the bloodstream.

“As a former policeman, he all too regularly came across as if he was in the interview room,” wrote Gregor Paul in 2016, “keen to get on with the real business of extracting a confession.”

Journalists can attest. Beware the rhetorical response. Take the question about Des Hansen on the eve of the 2015 World Cup final.

“Steve, I know your dad was a massive influence on you and a very good coach in his own right – can you say one piece of advice he gave you with regard to rugby coaching that rings in your ears to this day?”

“Yeah, you get all your options off the opposition,” Hansen instantly replied. “You might have to go away and think about that from the look on your face. If you just take some time out in a slow and quiet place, I think you will work it out.”

He’s your funniest, most acerbic friend. He’s a dangerous adversary.

Schmidt and Hansen know better than most that all warfare is based on deception. Kiwi rugby men to their fingertips, show me your “heavyweight” All Blacks – as Schmidt purred after “middleweight” Ireland manhandled Scotland a month ago – and Hansen will doff his cap to Sexton’s “computer” skills.

Hansen has seen it all. Not as a player. He was a decent centre – yes, a centre – for Canterbury in the 1980s. But it was his father who was a big noise around Mosgiel, but primarily Marist rugby club in Christchurch.

“I’m sure he and dad pushed salt and pepper shakers round the dinner table working out moves and defensive patterns for years,” a team-mate, Jerry Rowberry, remembered, evoking imagery of so many father-son relationships nurtured by sport.

Kiwis are nomadic by nature. Des Hansen, due to the financial need that came with raising four kids, moved from outside Dunedin to Christchurch after dairy farming turned into pulling pints. If such needs weren’t a priority, they say he would have coached at the highest echelons.

Hansen senior is even credited with developing the concept of the drift defence. “His philosophy was teaching people how to think the game,” said former Marist club captain Terry McCormick when Hansen senior passed in 2012.

“Steve has been saying it for many years, back to when I was coaching Super Rugby,” Schmidt remembered this week, “your kicking game shapes the defence.”

Schmidt has learned from Hansen as much as Schmidt has reminded Hansen about long forgotten knowledge.

“I’m not a god, I’m a normal bloke,” he reminded everyone on arrival in Japan. “They will work that out in a few days, I’m sure.”

What we do know of Hansen, and equally Schmidt, is the mask never slipped this week, this month or even this year, which is quite an achievement as both Ireland and New Zealand have suffered unusual dips in standards under their departing coaches.

The All Blacks were thumped in Perth after Scott Barrett’s red card while Ireland have encountered all sorts of problems, with the Twickenham savaging in August.

In stark contrast Hansen always sets a spicy agenda. He whispers the killer line. They are different and the same. All this messaging and mind games fades to dust. Maybe Hansen can set Schmidt up. Maybe he has met his match. Either way, it ends for both men soon.

“I was never good enough to play for the All Blacks . . . I’d give up everything I’ve done in coaching to play one game”.

“[My Dad] has been a massive influence on my life in a positive way. I’ve been lucky in coaching, being associated with other people as well and they’ve helped me to grow, but the basics definitely come from him,”

“You can blame me [for previous marriages ending]. I’m not going to put that on rugby. Breakdowns happen because two people don’t get it right for whatever reason.”

“My background is as a policeman and you don’t say too much when you’re a policeman. After 2009, I sought help with that to see if I could do [media] a different way but still protect the integrity of my players.”