‘Men against boys from the off’: the Scottish press react to Ireland’s 27-3 win 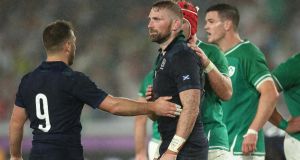 What were you worried about? After all the build-up, all the hype and all the nerves, Ireland have safely negotiated the first hurdle of their Rugby World Cup odyssey, with a dominant 27-3 win over Scotland on Sunday morning.

A mixed Six Nations campaign - followed by a dismal warm-up defeat to England in August - had tempered Irish expectations somewhat heading to Japan.

Gregor Townsend’s Scots seemed tricky first match opponents, in a fixture which seemed likely to decide who would finish first and second in Pool A.

But any fears Ireland would be caught cold by Scotland were quickly banished, as they flew out of the blocks in Yokohama, blitzing their Six Nations rivals from the off.

Ireland were dominant at the breakdown and clinical in possession, with the set-piece operating smoothly, a month after it was pulverised at Twickenham.

But while Schmidt’s men deserve credit for their their performance, Scotland weren’t great, and they were comprehensively out-thought and out-manouvered as the game passed them by in the Yokohama rain.

And this is a view shared by much of the Scottish press, who have been complimentary to Ireland and critical of Scotland in equal measure.

Indeed, in The Scotsman, Iain Duncan writes: “In the end it was the Scots who were not only smashed, but utterly pulverised, by a crushingly clinical display by the world’s No 1-ranked team.

“It was the big moment, after months of lead-up, for what has been described as the “best prepared Scotland side to ever go to a World Cup”, but they failed to turn up.

“It was also Scotland’s most experienced ever starting XV, with a combined total of 630 caps, but Ireland’s battle-hardened machine made it look men against boys from the off.”

And he is quick to make clear that as good as Ireland were, Scotland were also pretty bad: “Make no mistake, Ireland were an awesomely impressive sight. Ruthless, clinical and carrying out a simple but effective gameplan with passion, power and purpose.

“Scotland, in contrast, once again looked like rabbits in the headlights. Panicked, disjointed and seemingly surprised by what everybody knew was coming - a physical onslaught.”

Duncan’s thoughts are echoed by Fraser Wilson in the Daily Record, who takes a fairly dim view on Scotland’s performance. He writes: “Scotland were slaughtered in their opening game of the Rugby World Cup in Japan as Ireland dished out a Yokohama lesson.

“Gregor Townsend’s side underperformed badly and were left to think again as the Irish racked up a 19-3 lead at the break.”

Ireland’s victory should provide huge momentum going forward, with fixtures against Japan, Russia and Samoa to follow. And after a slow summer they appear to be hitting their straps at the right time - something which hasn’t gone unnoticed.

Indeed, in the Telegraph, Charles Richardson writes: “Ireland entered the tournament as the world’s top-ranked team for the first time in history, but were also dogged by the spectre of their record 57-15 defeat by England at Twickenham just last month.

“Head coach Schmidt’s tournament plans had been heavily scrutinised, Rory Best’s captaincy had been questioned, and Ireland were left to lament a second frustrating loss to England in the calendar year.

“All boss Schmidt’s plans came to fruition on the shores of Tokyo Bay however, with skipper Best leading from the front with a timeless, tub-thumping, try-scoring turn.”

Meanwhile in the Guardian Paul Rees reflects on an afternoon where Ireland’s impressive ball retention, coupled with a number of needless errors, saw the Scots put to the sword.

He writes: “Lesson one in the manual on how to beat Ireland is to cherish the ball. Scotland must have packed the Japanese version as three mistakes in the first-half led to three tries for their opponents and a spirit-sapping 16-point deficit at the break.”

Sunday morning’s victory is proof Ireland are on the right track as they bid for a place in a maiden Rugby World Cup semi-final. But as The Independent’s (UK) Adam Hathaway writes from Yokohama, they are still a long way from being considered world champions elect.

He writes: “Under a year ago with two wins over New Zealand, in 2016 and 2018, and a Six Nations Grand Slam in 2018, Ireland would have fancied their chances in a World Cup. Not many would have bet seriously against them but it is a bit different now. . .

“They have not really been the best team in the world at any point this year but this World Cup opener was a decent start in their bid to get to the top of the world when it really matters. Can they win it? Yes. Will they? Probably not.”

There is plenty of work to be done - but it’s not a bad start.