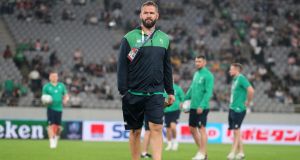 Over the past 20 years Irish teams have played powerfully during the Six Nations tournaments, then travelled to the RWC, full of hope, only to fail at every quarter-final.

Ireland and Italy are now the only two countries from the Six Nations and The Rugby Championship who have not made a Rugby World Cup semi-final.

It is time for Irish rugby to embark on a change of thinking surrounding the national team’s preparation for RWC 2023. As Einstein put it: “The significant problems we face cannot be solved at the same level of thinking we were at when we created them”.

If Irish rugby repeats what it has always done, then quarter-final failure awaits us again in 2023. A paradigm shift is required. Ireland needs new thinking to win at RWC 2023.

An independent committee to review the national team’s processes must be established, with the aim of creating a new national coaching plan. This plan must detail the leadership, structure and the playing style of how rugby needs to be performed across all professional Irish teams for success to be achieved in France and beyond.

This review would obviously include Andy Farrell. However, Ireland must look outside the IRFU for independent experiences to offer guidance for the change that is essential within Irish rugby.

Graham Henry and Wayne Smith are the men to seek out. Both are wise and experienced rugby men who have lost a RWC quarter-final and gone on to lift the William Webb Ellis trophy.

The greatest rugby document I have ever read is the NZRFU’s review, produced after New Zealand were defeated in the 2007 quarter-final by France.

While the media was full of demands for “lopping off the heads” of the coach, Graham Henry, assistant coach Wayne Smith and captain Ritchie McCaw, the NZRFU wisely brought in an independent team of consultants and conducted a deep analysis of the national team’s performance and charted a course towards future success.

New Zealand rugby implemented the recommendations of that process and reappointed Henry, Smith and McCaw in their senior roles. History tells us that New Zealand won the next two World Cups (in 2011 under Henry) and it took one of England’s greatest ever performances to knock them out of the third.

If Ireland are to fulfil their undoubted potential at a Word Cup it will require a national effort.

Joe Schmidt has been Ireland’s greatest ever coach. He has rightly been applauded and should be celebrated for his wonderful successes. Despite his gargantuan efforts he has also proved one man can not do it alone.

It is clear to me one major aspect the national review must consider is the need for the appointment of an independent selector to act as an adviser to the national coach. Grant Fox, the former great outhalf, acted in this role for New Zealand.

New Zealand rugby has a national plan of how they want to play the game. If we watch the Kiwis Super franchises, we can observe a distinct style of rugby. Ireland must journey down a similar path. This process will take time and should not be rushed.

This places Farrell under great pressure from day one, as he has to act now as the Six Nations matches are approaching fast. He also must prove he is the solution, not part of the problem. Farrell should follow Rassie Erasmus’s advice and turn the pressure of this situation into a golden opportunity.

Farrell must focus on new playing processes for Ireland to perform with success in the Six Nations and on the tour to Australia. Preparation time is frustratingly short. A shrewd move by Farrell would be to adopt the ready-made playing template sitting in D4. Leinster’s current philosophy of play is an excellent fit for the national team.

In attack, Leinster use footwork before contact. As do England, Wales, Australia and New Zealand. Currently, Ireland do not.

Leinster use attacking shape with co-ordinated interaction between the forwards and the backs to create a “whole of team” attack. They attack from turn over ball, counterattack, as well as set play. As do England, New Zealand, Australia, South Africa. . . just about every team except Ireland.

In the long term a national coaching plan is required where all the provincial teams will be required to fall in behind the national team plan and play the “Irish way”. Right now and for the last 20 years “the Irish way” has been impossible to define. Farrell must give “the Irish way” life.

That does not mean Muster have to play like Leinster. It means all the provinces have to play a style and work on skill sets that can be transferred to the international stage.

This immensely difficult task will be the making or breaking of Andy Farrell as a head coach. If we continue to witness an Irish team as bereft of attacking options under Farrell as we did at RWC 2019 then, sadly, Farrell will be replaced before the next Lions tour.

I know that is very harsh and unjust, but it is also the reality. Coaching is a tough business that’s becoming brutal. As a player in Rugby League, Andy Farrell was one of the bravest I have ever seen.

He now needs to be the same as a coach.