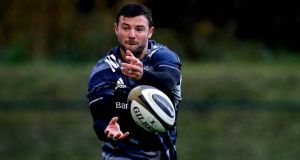 Connacht and Leinster welcome back a number of Ireland internationals for the opening interprovincial fixture of the 2019-20 Pro14 season, in Galway on Friday night.

Hosts Connacht are currently second place in Conference B with four wins from five fixtures, while defending champions Leinster top Conference A with a 100 per cent record.

And Connacht boss Andy Friend welcomes back Ireland’s Jack Carty at outhalf on Friday, with Bundee Aki - last seen when sent off in the World Cup win over Samoa - named on the bench.

Carty joins Caolin Blade in the halfbacks, with Peter Robb - man of the match in last weekend’s win over the Ospreys - and Tom Farrell starting in midfield. Stephen Fitzgerald, Niyi Adeolokun and Darragh Leader form the back three.

Up front, Denis Buckley and Finlay Bealham start at prop either side of Tom McCartney, with Cillian Gallagher and Joe Maksymiw in the engine room.

Captain Jarrad Butler signed a new deal with the province on Wednesday and he starts in the backrow, alongside Eoghan Masterson and number eight Paul Boyle.

Meanwhile for the visitors, Robbie Henshaw has been reinstated in midfield, and he lines out against his old team at outside centre.

Joe Tomane starts inside him at 12, while Hugo Keenan returns at fullback. The back three is completed by James Lowe and Adam Byrne.

Luke McGrath also makes his seasonal provincial bow on his return from Japan, with Ross Byrne - who missed out on World Cup selection to Jack Carty - at outhalf.

Cian Healy and Andrew Porter form a powerful frontrow either side of Ronan Kelleher, with Scott Fardy and Devin Toner named at secondrow. Josh Murphy, Will Connors and Max Deegan make up the backrow.

There are two further Irish squad members from Japan named on the bench, with Rhys Ruddock and Rob Kearney among the replacements.

Ahead of Friday night’s game in Galway - for which, surprisingly, no rain is forecast - Friend said: “We are happy with the start we have made in the Guinness Pro14 with four wins in a row.

“What is even more satisfying is the depth we have already displayed, with 35 players already used in the opening five games. With Jack Carty, Bundee Aki and Sean O’Brien all coming back in this week, that number will hopefully go to 38.

“We obviously face another huge challenge this weekend against Leinster but our challenge is to just maintain the consistency we have seen over the past few weeks both at home and away. We take huge pride in our home record, with just one loss in 13 games and we expect a massive crowd again on Friday night.”