Dream turns to reality for Mapimpi and South Africa 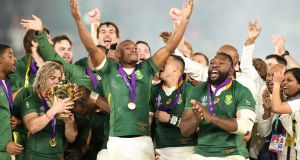 Entering the last 15 minutes of South Africa’s third final, it seemed the Boks were set to complete a third World Cup triumph in inimitable style. Whereupon all changed, changed utterly.

Having won each of their previous finals with five three-pointers, they led 18-12 and akin to the 1995 and 2007 final, this victory was set to be described as primarily a celebration of their scrummaging dominance, all-enveloping defence, Handre Pollard’s goal-kicking and scoreboard pressure.

Then, after 225 minutes without scoring a try in three finals, Willie le Roux took another fine high catch from Ben Youngs’ box kick. It is understood that Le Roux assured Rassie Erasmus he would have his best game of the tournament against players he was familiar with from the Premiership, and he was true to his word.

From the moment the ball was recycled, it was on, albeit after passes from Faf de Klerk and Lukhanyo Am, the key was the quick transfer by Malcolm Marz to release Makazole Mapimpi up the left touchline. His deft chip over Elliot Daly was regathered and both skilfully and unselfishly transferred by Am to give Mapimpi a simple touchdown.

That, in tandem with an ensuing trademark goosestep and side step by Cheslin Kolbe, provided a fitting final flourish.

Siya Kilisi’s remarkable story has, to a degree, somewhat overshadowed the even more unlikely rugby journey undertaken by Mapimpi. From a township in the rural Eastern Cape, it is non-rugby territory and Mapimpi is the first and only player in his family to play the game.

“It’s a very special story to tell about Makazole,” said the Springbok assistant coach Mzwandile Stick during the tournament. “As a youngster, he would walk 10km a day to school. It’s a nice story to tell to youngsters that, irrespective of your background, if you work really hard and your opportunity comes, you need to be ready.”

Even three years ago, Mapimpi was playing club rugby with Boland and only began to gain attention with the Cheetahs in the Pro14, scoring one of 10 tries in 13 appearances on his debut away to Ulster in September 2017.

Noted for normally saying very little, his speech was almost a whisper in the mixed zone after the final when he recounted his journey, and his emotions moved the small cluster of journalists around him who strained to hear his every word, which was almost impossible.

“This means a lot for me because I’m coming from a long way. I’m blessed. I’m from a rural area, I didn’t make the SA schools teams. I went into the good hands of a coach. He always motivated me. I’m always asking ‘what can I do?’ But I had good people around me to motivate me and give me advice. For me, it’s been a long, long, long, long journey. But I think God is good. I’ve been working hard.

“I remember five years back, I was playing Sunday-league rugby, at a club. There’s no professional league in the rural areas and one of my friends told me ‘listen, you can make it man’. I told the guy ‘listen, how can I make it man? There’s no one here for me. There’s no-one watching me.’ The guy said ‘just keep going. You can make it’.

Stick describes him as the most improved player in the squad after radically improving his aerial skills, he beat Elliot Daly twice to high balls on Saturday, and afterwards Mapimpi could understand what Erasmus meant when he talked about the pressure of growing up in South Africa compared to the pressure of playing for the Springboks.