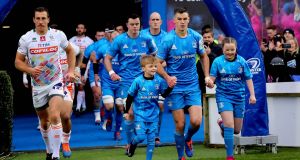 Leinster’s Woodstock 50th anniversary celebratory tie-dye squashed, fifty shades of blue is in the running for the gong in the worst jersey of 2019 category. Photograph: Inpho

It appears there are two types of clubs in this seasons Champions Cup. The wolves and the sheep.

You can follow where this is going, can’t you? Yes, the wolves get to eat the sheep. Leinster, Munster and Toulouse are card carrying members of the Champions Cup ‘Wolf Pack Club’.

Against Benetton, Leinster were in total control. Highly organised in their approach and still only in third gear, Leo Cullen’s side clamped their jaws around Benetton’s throat in the opening minute and did not let the pressure off for the entire match.

Leinster’s attacking structure can get a little complicated, but when they get it right, as they do in almost every match, it lights up the arena. They are a lethal try scoring machine. They can score from mauls, close running forwards, cross kicks to wingers, individual brilliance (like Johnny Sexton’s try), counter attack . . . you name it they can score from it.

In Swansea, Munster showed signs that they are in the process of positive change. It was a joy to see the excellent counterattack from turnover ball that led to Andrew Conway sprinting away to score.

Stephen Larkham’s imprint was all over their attack. They employed a mature gameplan that patiently wrestled control from an Ospreys team we knew would fight for a good 60 minutes, before taking the bonus point at the death.

Last weekend’s performance away from home is exactly what has been lacking from Munster teams for years. This was a win that can lay the foundations for a strong campaign.

At Gloucester, Joe Simpson scored two long range individual tries against Toulouse. This alone would have been enough for most French sides to hoist the white flag and look forward to hors d’oeuvres and rouge Martinis at a recovery soirée the following evening. But not Toulouse.

This year’s Racing team have yet to prove their 'wolf' credentials. The attacking systems they have displayed so far will not break Munster

They got down and fought like street fighters. They showed they have what it takes to win on the road. Whatever the price is for victory, Toulouse are prepared to pay it.

Teams with that mindset are dangerous beasts, because they are never beaten. Andy Friend can also be rightly proud of the fight Connacht put up against Montpellier but if Toulouse play with the inspiring attack that they are capable of at Stade Ernest-Wallon, then Connacht are going to need all the courage they can muster to compete with them. Up close and personal, Toulouse are good.

Then, of course, there are the Champions Cup wolves disguised as sheep. In taking La Rochelle apart at Stade Marcel-Deflandre, Exeter showed they have picked up on the idea.

After years of not producing the same form in Europe that perennially sees them in the upper echelons of the English Premiership, Exeter delivered an away performance of substance. They did not just defeat La Rochelle, they humbled them. For the La Rochelle coaches, Ronan O’Gara and Jono Gibbes, who both carry such enormous history in Europe, it was a tough day at the office.

Speaking of clothing, the opening round of the Champions Cup was awash with exceptionally awful jersey designs that could see most of the gear used as high vis work clothes in the future. It would appear that the inspiration for Exeter’s strip came from the regurgitations of overeating beetroot and blueberries.

From the Ospreys viral mix of blue, grey and iridescent green, to Connacht’s hatched greenish, grey lines, to Leinster’s Woodstock 50th anniversary celebratory tie-dye squashed, fifty shades of blue, they all vie for the gong in the worst jersey of 2019 category.

Tomorrow at Thomond, Munster’s feared red and navy, contrasting with the classic sky blue and white stripes of Racing 92 will be a beacon of class in a crass sea of jersey marketing. Whether Racing are really sheep wearing a beautiful wolfish jersey is yet to be defined.

In their last two matches Racing have beaten Stade Français and Saracens. Usually that would tell us that the Parisians are in fine fettle. However, Stade Français are a shadow of their former greatness. Rudderless, poorly conditioned and playing with little structure, I was saddened watching their mediocrity.

The second XV that Saracens put out last week did not extend Racing so they remain untested. They have fine individual players. Finn Russell was outstanding. Teddy Thomas and Virimi Vakatawa were lethal at close range. Donnacha Ryan gave his usual whole hearted performance and Camille Chat is a powerhouse.

However, this year’s Racing team have yet to prove their “wolf” credentials. The attacking systems they have displayed so far will not break Munster. The last 15 minutes is when Parisian luxury may take its toll on Racing. I suspect a lack of world class fitness should see Munster overcome them late on.

As for the Lyon jersey, it did not matter what it looked like, the men who wore it at Franklin Gardens simply did not stand up against Northampton. The Saints ran riot in the opening 40 minutes. Lyon at home will need much greater intensity to contain Leinster.

In the absence of the international players during the World Cup, Lyon have bolted to the head of the Top 14 and cannot quite believe their luck, so they appear to be totally focused on the Top 14.

Lyon are known as Les Loups - The Wolves - but there are no howls coming out of Lyon. All I can hear is Baaa.