Many reasons why England lost to Australia but scrum was key

After England's disastrous early exit of the Rugby world cup Stuart Lancaster says he will only consider his future as coach after England's final World Cup match. Video: Reuters 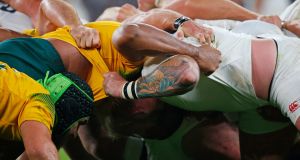 The Australian scrum was dominant all night and a source of penalties and crucial momentum for the Wallabies. Photograph: Reuters 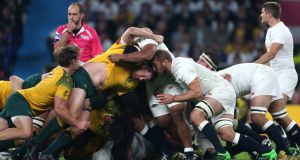 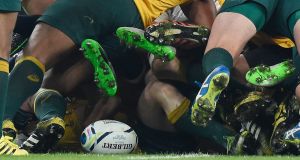 The ball is seen at the base of a scrum during the match between England and Australia at Twickenham. Photograph: EPA

Of all the people who had a cruel hand in ejecting the hosts from their own party, a special mention should be made of Mario Ledesma, the former Argentina hooker, who has done the impossible and sorted out the Australian scrum.

It wasn’t that Australia smashed England at the set piece, although the last penalty will have made old Mario purr, but its clear improvement made England think twice about how to play this game. In the past they had Andrew Sheridan to wreck Australia. Now they were not so sure.

So, instead of going back to a style of yesterday, they went back further, to yesteryear, and took a huge gamble. England came out to play, an abandonment of tradition not without its perils. It cost England the 1991 World Cup final, when they took the ball away from their dominant pack and went wide against Australia. Would width save them in 2015? It would not.

Australia play a fluid game better than just about anyone. Or do they? England were not eclipsed at first. Owen Farrell’s one-handed pass to Anthony Watson was a piece of invention straight from a manual written in a warmer climate. And Australia looked disconcerted by this challenge.

The way Israel Folau paused and failed to make his pass to the unmarked Rob Horne suggested the clumsiness of a player more used to wading through mud. Was this to be a game of reversed perceptions?

It was here that the scrummage was to have its say. Australia had the temerity to drive on their own put-in. Australia had made a mess of what they do best – score with a flourish – but no way would they allow England to dictate strategy. Keep passing, England, because you won’t beat us here.

England obliged. Joe Launchbury was in his element, elastic enough to embarrass Will Genia by charging down two of the scrum-half’s kicks, and clever enough to release Tom Wood on a gallop down the touchline with a sweet flick of a pass. The second row had a run of his own, the recipient of a pass from Ben Morgan. Jonathan Joseph twice made clean breaks. England were looking for a high tempo and to pass.

Their reward? Nothing but a penalty from a scrummage – still there, nagging away, that old assembly that releases its hold on the game with great reluctance. Given that this particular scrum was set bang in front of the posts, with freedom on both sides, 20 metres from the line, England might have had an eye on more than three points.

Australia were more successful at turning their opportunities into rewards. Folau had flunked his first touch but with his second he showed what a danger he is, leaving three England tacklers behind him from a standing start.

It was nothing compared with the contribution of Bernard Foley. The outside-half had been offered, almost sacrificially, as the player who might crack, unaccustomed as he was to taking part in too many games of such stress. This lamb decided to slip his tether and took to the action as if it were just another game of footie on the beach with his mates. He scored the first try by gliding through a gap created by perhaps the pass of the night, delivered with a dash by the big prop Sekope Kepu.

For his second try, Foley interwove passes and angles with Kurtley Beale with a silkiness that lit up the night. The key pass was sublime to one set of eyes and forward to a much larger constituency. It withstood review and the try was awarded. Foley was the doorman, opening the exit, ushering England out.

In Pool A nothing could be so straightforward, not even when Foley – who else? – put Australia 17 points clear. It should have been insurmountable but England drove on. They must have known what would be coming their way if they lost.

Anthony Watson had to play a part. He has fast become a winger like Jason Robinson, a dazzler who makes a stadium breathe in sharply whenever the ball comes his way. Watson did not disappoint here, his finish born more of strength than his trademark elusiveness. England were back in the game.

Just for a moment, Australia had a rethink. They put aside the beach-rugby manual and ran lines in a more conventional fashion, with forwards driving up in midfield and backs looking inside to find these safety runners. There was still a quarter of an hour to run on the clock but it looked as if Australia were launching an extended trundle to the finish line.

Suddenly the comfortable rhythm of recycling and driving was disturbed. England stuck a boot in, then another, hacking the ball downfield. This was anything but poetic rugby now. It was chaos. The penalty that ensued brought them to within a converted try.

It was not the final twist. There had been an edge to the contact area despite the freedom of movement, and now it tipped over the edge. There are several angry men – Dan Cole, Mike Brown and Owen Farrell somehow cannot conceal their rage – and it was the outside-half who dipped a shoulder into Matt Giteau off the ball. England were down to 14 and Foley was up to 23.

Ledesma’s scrum would have its say. Thanks to one last heave, Foley soared to 26 points, before a try by Giteau broke his monopoly on the scoring.

Foley was still the doorman of the night, sweeping England out of their own World Cup in barely more than a fortnight, and Wales and Australia into the quarter-finals.