Sam Cane and company have England in their sights 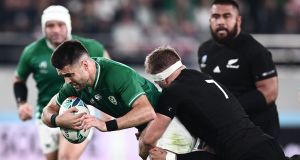 It would probably only deepen the wounds from last Saturday’s quarter-final in Tokyo Stadium were England to dethrone New Zealand in next Saturday’s potentially epic first semi-final in Yokohama.

This is not an anti-English bias, rather a win by Eddie Jones’ team would magnify the scale of Ireland’s 46-14 defeat. Somehow another emphatic All Blacks win might make the post-mortem marginally more bearable.

Not that England don’t have the same historical baggage.

Much has been made of their 38-21 win at Twickenham in 2012 which denied a vintage All Blacks team an unbeaten calendar year. But that remains their only win in the last 16 meetings between the countries since Clive Woodward’s prospective world champions won in Wellington in 2003.

The major difference between Ireland and England, of course, is that the latter have form and weapons. Although he would never admit it, Jones might also have noted how Ireland created chances against the All Blacks’ defence, even in that decisive opening 35 minutes, but failed to capitalise on them.

With the score still only 3-0, Johnny Sexton’s inside pass worked an opening for Rory Best, but with Keith Earls on his right shoulder, Aaron Smith’s tackle twisted the Irish captain towards his left, where he instead offloaded to Conor Murray. Earls would have been clean through on Beauden Barrett.

When Best, often used as a fulcrum, pulled the ball back for Sexton to hit Keith Earls, he had a two on one outside and an unmarked Jordan Larmour holding his right hand aloft on the touchline. But Earls took two strides and Jack Goodhue’s hit dislodged the ball, forcing Larmour to scamper back and save the situation.

The 32nd minute killer third try actually emanated from another well-constructed Irish attack. Off a nicely worked set-up in midfield, Garry Ringrose ran a good decoy line and Murray’s long pass hit Sexton but, with Jacob Stockdale in space, Rob Kearney was too flat to the Irish outhalf and instead Sevu Reece’s tackle and Richie Mo’unaga’s hack led to Barrett scoring.

Ireland loaded the gun, but couldn’t fire a shot, which must be particularly disappointing. But England will.

Until then, it’s going to be a long week. The love bombing and the edginess has already started, with Jones describing the All Blacks as the greatest sports team ever.

Brodie Retallick smiled wryly when asked about that. “I suppose that is very nice of Eddie. I don’t know any statistics or anything about that. It’s nice of him to say but it’s not something this team’s focused on. So good on him.”

Retallick then paused when reminded by an English journalist that he mistakenly calling Courtney Lawes the New Zealand politician Michael Laws at a press conference in 2014, and what he thought of the current English locks.

“Is that supposed to be humorous? I made a mistake, called them the wrong name, the name of a New Zealand politician. Good on you,” he said sarcastically. “We have great respect for all the rugby players out there. We know who they are and we know what they’re about. We look into every opponent going into the weekend.”

Why is it so many All Blacks – Retallick, Sam Whitelock, Aaron Smith and Sam Cane – are blooded against Ireland? Cane has had limited game time in this World Cup but although he only had 40 minutes last Saturday, in typically abrasive fashion he left his mark with a couple of hard, marginally late shots on Sexton and he knows how to make contact at the breakdown.

One of the odder statistics in this semi-final week is that despite making his debut against Ireland in Christchurch in 2012, despite seven meetings with England since then, this will be a first Test against the Red Rose for the 66-times capped Cane.

“It’s a little bit odd really. Best chance I had was when they came to New Zealand for a three-match series and I was injured. I missed the last one through injury, too.”

There was also the minor matter of a bloke called Richie McCaw. The All Blacks have opted for a second openside in their back row in Ardie Savea, who’s playing the best rugby of his career.

“I’d love to think we have got room for improvement,” said Cane. “Ardie’s been working very hard on his set-piece work. Our roles are pretty interchangeable in attack and defence.”

The battle of the back rows looks likely to be hugely significant. Very similarly, only since the summer has Jones also plumped for two opensides in Sam Underhill, now converted into a bulkier blindside, and Tom Curry, who was outstanding in all he did on both sides of the ball in their win over Australia. Jones has labelled them the Kamikaze Kids.

“Underhill and Curry have been pretty impressive,” said Cane. “They’ve both got a huge appetite for hard work, very good skill sets.”

Whether they know their names or not, no All Black is ever too effusive about his opposing players,