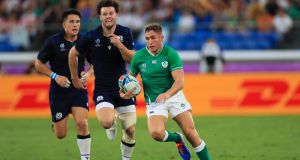 Rob Kearney: “With Jordan [Larmour], given we’re provincial teammates, I’ve had to endure that a lot over the last few years.” Photograph: Craig Mercer/Inpho

Professional sport can be an increasingly cruel business. If below par collectively, as Ireland discovered in Twickenham, a team can be routed, and if slightly off individually, the consequences can be even more brutal. As Devin Toner can readily testify.

Players in most sports are understandably reluctant to reveal their true feelings when not only injury sidelines them, but their replacement has a blinder. So one can only imagine how Rob Kearney felt, having looked as fit and sharp as ever in the win over Wales, when he was ruled out of the opening win over Scotland with a calf strain sustained within five minutes of a training session the previous Sunday. That it was a World Cup compounded his frustration.

“It’s always tougher watching on. I’ve gotten particularly good at it over the last number of years,” he noted with a wry smile. “When the boys came off the field at the weekend I was just so jealous of them that they’ve got that first one under the belt, so that’s going to be a challenge.”

Furthermore, opportunity knocked for Jordan Larmour, and he grasped it.

“Yeah, it’s not nice and with Jordan, given we’re provincial teammates, I’ve had to endure that a lot over the last few years. So, yeah, it is tough but at the same time you have to be happy for them as well. It was a big game for him. It was a big opportunity but it was a big challenge for him as well, and he passed it with flying colours. He’s such a good young lad and you can’t help but be very pleased for him.”

Kearney was also available in an advisory role.

“We chatted a fair bit during the week. We had a brief chat the night before the game but I just left him to it on game day.”

As the punditry lurches from lamenting Kearney’s prospective absence and wanting him replaced, he also noted dryly: “I think perception and reality can be very different sometimes. Certainly they (the Irish back three) didn’t look in any way like they were panicking at the weekend. Quite the opposite. I don’t know, you go through phases of people wanting you out and then wanting you back in. I can’t keep up to be honest!”

Kearney looks set to be re-instated against Japan, and while admitting he’s a little bit behind the eight-ball, he can draw on the experience of two previous World Cups as well as two Lions tours in a 95-match Test career.

With a six-day turnaround, the squad have also had a decidedly relaxing build-up, half-an-hour from Shizuoka city and also half-an-hour from the Irish media pack in Hamamatsu, as the only occupants of the Katsuragi Hotel, a modern-day castle built by the Yamaha group, with three different types of hot springs and two golf courses.

“We won’t be on the golf courses too much, we’ll be in the hot springs a bit. But it’s nice to go outside the city – it’s very Zen-like. The phone signal’s not great, there’s no outdoor shoes allowed in, sleeping outside with the crickets and nature. So it’s a nice changeover, it is.”

Watching Sunday’s first half it certainly felt like Ireland’s best 40 minutes since beating the All Blacks, but Kearney warned: “I think so, but at the same time it’s important we don’t get too far ahead of ourselves. Twickenham was only three or four weeks’ ago and we got a serious hiding that day. We’re certainly in a much better place, but there’s still more in us and we can still keep adding bits and pieces in our game.”

In addition, the Scottish team have been pilloried back home, and Kearney conceded: “Certainly that wasn’t as good as Scotland can play, they’ll probably be very disappointed with their performance. If you had to be very honest about it, will Japan pose a better threat than Scotland? You’d have to say yes based on what they produced at the weekend. It’s very important that we understand that as a team.”

The Japanese camp have been discernibly bullish this week, viewing it as their cup final, and it transpires that the Irish squad have been saying the same things.

“It’s funny that they said that because that’s what exactly what we said today in our own team meeting, that this is their cup final. So we’re certainly under no illusions as to what’s coming and this being the game that they’ve been eyeing up, and they’ll have huge support and it will be guns blazing. It should be a fantastic occasion.”

The Brave Blossoms will offer different challenges too, both in Ireland’s backfield and elsewhere.

“They will keep the ball in play a lot more,” forecast Kearney. “They won’t kick it out. They will try to kick it down the middle more and rush on. They will back their fitness a lot. They will offload a lot more than Scotland will. I’d expect ball-in-play time to be higher, and the tempo of the game to be a little higher too.”

Kearney goes into this game on the back of ending a 26-game sequence without a Test try, having endured several near misses. “I ran into Romain Poite at one stage two years ago!”

But it was nice to end the barren run.

“It is nice, but unlike soccer and strikers we don’t get judged on scoring tries. So if you don’t score tries there’s a good chance that you’ll stick get picked but at the same time, it’s nice to score them and every game that goes on that you don’t score one, it’s just in the back of your head, ‘That’s another one that I haven’t scored one’.”

“So I’m hoping they’re like buses and that they just keep on rolling in.”