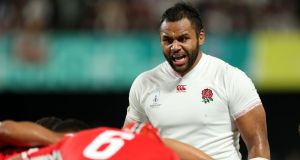 Billy Vunipola retains his place in the England XV for Thursday’s clash with the USA. Photograph: David Rogers/Getty

Billy Vunipola is one of five England players who will start their second match in five days on Thursday, with Eddie Jones also naming George Ford as captain to face the USA. Vunipola played all 80 minutes in the bonus point victory over Tonga but has been named to start in his 11th consecutive Test as England seek their second win of the World Cup.

As expected Jones has made wholesale changes, bringing in 10 new faces to the starting XV, but it is those who remain in the side who catch the eye. Vunipola, as well as Ford, Joe Marler, Tom Curry and Elliot Daly, also keep their places while Lewis Ludlam makes his first World Cup start at openside flanker, as reported by the Guardian on Tuesday.

Henry Slade is absent from the 23 after picking up a knee injury against Tonga while Mark Wilson is only on the bench, meaning both Curry, who also completed 80 minutes on Sunday, and Vunipola continue. Vunipola started all four of England’s warm-up matches with Jones insisting that his star No 8 did not need to be rested despite his recent injury history. It is nonetheless a surprise to see him named to start against the USA.

Elsewhere, with Owen Farrell on the bench, Ford captains the side from outhalf with Piers Francis and Jonathan Joseph, who impressed off the bench against Tonga, named as the centres. Joe Cokanasiga has been deemed fit enough to start despite a recent knee problem with Ruaridh McConnochie winning his second cap on the other wing.

Up front, Marler’s selection ahead of Ellis Genge is a surprise while Luke Cowan-Dickie comes in at hooker and Dan Cole wins his 91st cap to move level with Jonny Wilkinson in third place on England’s list of all-time appearance holders. Ben Youngs will join him on 91 as and when he comes off the bench with Willi Heinz starting at scrum-half. George Kruis and Joe Launchbury comprise a new-look second row. The XV is similar to that selected in England’s second warm-up match against Wales with 12 survivors from the side picked for Cardiff, though McConnochie was a late withdrawal from that defeat.

In total 10 of the players who started against Tonga have been included in the 23-man squad with Manu Tuilagi, Jonny May, Sam Underhill, Maro Itoje and Jamie George all rested. From the 23 on Sunday, there are 17 survivors with Anthony Watson, Courtney Lawes and Kyle Sinckler on the bench. Jack Singleton is also among the replacements.

Jones sought to prepare for the four-day turnaround last autumn with a truncated week’s preparation before England hosted Japan. For that match he made 11 changes to his starting XV. “The four-day turnaround is something we experimented with against Japan last autumn and so the players have had some experience of it,” he said. “You have to make sure the two days before the game are exactly the same as you would normally have for any other game. So for us, a short and fast run tomorrow and today is an active recovery day. What I see now is players handling it really well but the game on Thursday will be the litmus test.”