Owen Doyle: A red card is not a referee issue – it’s a player/coach issue

If a player merits a red card, then please don’t shoot the referee – he is but the messenger 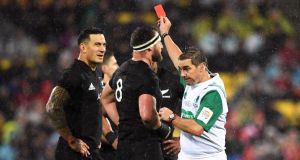 New Zealand’s Sonny Bill Williams is shown a red card by referee Jerome Garces during the second Test against the Lions in 2017. Photograph: Andrew Cornaga/Inpho/Photosport

Just prior to the start of the World Cup there was a proposal put forward to World Rugby by a major union. It was both simple and breathtaking – that a player sent off for foul play could be replaced after 15 minutes.

At best this was disingenuous, at worst it was cynical and self-serving. It was quite rightly rejected by unions in the Northern Hemisphere.

It is hard to see how it even got a hearing. It was completely outside the normal law cycle and there was no evidence as to how the game, as a whole, would have been affected. It may have been argued on the grounds of player welfare, in that 14 playing 15 is unsafe. I don’t believe that there is any empirical evidence available to support such a standpoint.

What does happen, though, is that a team reduced to 14 find it very hard to win a tight match, and New Zealand did lose to Australia in the Rugby Championship in such circumstances. No team in the world that wants to lose like that, but should the finger be pointed at the referee or at the coach and offending player?

The proposal would have meant that a red card offence would have seen a team punished for only five minutes more than a team who have a player sin-binned for, say, a deliberate knock-on. Crazy stuff.

Even if 14 v 15 is found to be against player welfare and a player can be replaced, then an additional sanction would be necessary – such as a penalty try for a red card no matter where on the pitch it is incurred.

Is it also too cynical to suggest that this would have given a team the freedom to target a key opponent? Maybe – maybe not? But I wouldn’t bet against it.

There is no doubt that, as a spectacle, a 14 v 15 match can lose appeal, but – despite the so-called ‘’concerns’’ of some leading coaches and media figures – a red card is not a referee issue. It is a player/coach issue.

If a player merits a red card, then please don’t shoot the referee – he is but the messenger. There must, of course, be a balancing factor here. If the referee gets it wrong then he should suffer a significant consequence.

I imagine that it would be hard to find anyone in New Zealand who believes that the Scott Barrett red card last month for a shoulder to the neck/head of Michael Hooper with significant force was merited.

England coach Eddie Jones has been widely reported as saying the red was “ridiculous”. That comment is, in itself, not too tricky to ridicule!

As a small aside, after Jones had previously stated that Owen Farrell did not need to change his tackle technique, it now transpires from the England camp that he has done exactly that. I’ll bet (and hope) he has!

What is understandable is the frustration in the Southern Hemisphere that (in the Ireland v Wales, warm-up match) Devin Toner should have been cited for a similar offence to that of Barrett.

Missed by the match officials – which it shouldn’t have been – the next normal step would have been for the citing commissioner to address it. Why he didn’t is not acceptable – it was as much a clear red card as Barrett’s.

In the recent past there were similar objections raised when the referees were under instructions to deal with players being taken out in the air. Same with spear tackles. Let’s not forget that Sam Warburton’s red card in 2011 World Cup semi-final against France, delivered by Alain Rolland, was hotly and emotionally contested.

It was admirable of Welsh former Test referee Clive Norling to state, publicly and immediately, that it was definitely the correct decision. And, once things had calmed down after that World Cup, Warburton himself said the decision was right.

I wonder what one or two referees, who demurred at Rolland’s call, thought of those statements?

In relation to spear tackles and take-outs in the air the next step was that, instead of objecting, the coaches went about changing player behaviour. Now, thankfully, these two exceptionally dangerous actions have largely disappeared. So, change can be achieved.

Everybody has enormous respect for players and coaches at all levels. Personally, having worked with every Irish coach from Warren Gatland to Joe Schmidt, I have the utmost respect for these men. But, without much doubt, there is a need for a far greater buy-in to eradicating dangerous play.

The example must come from the top coaches. It is the only way. And it is a responsibility.

World Rugby’s Playing Charter states that “it is perfectly acceptable to be seen to exert extreme physical pressure on an opponent in an attempt to gain possession of the ball, but not wilfully or maliciously to inflict injury”.

Great care must be taken that this core value remains a key principle of the game. Otherwise where are we heading?

The charter further underlines the importance of rugby being played both to the letter and within the spirit of the laws, and “that the responsibility for ensuring that this happens lies not with one person, but involves coaches, captains, players and referees”.

Finally, it’s important to make reference to the recent statement by World Rugby which, in essence, acknowledges that the match officials team had a bad day at the office on the opening weekend, and that rugby expects and anticipates much better.

This can be seen as hanging the team out to dry at this very early stage of the tournament. I’d prefer to view it as wiping the slate clean and a determination to press that restart button. Again, let’s wish them well.