Robbie Henshaw offers timely reprise of his versatility and class 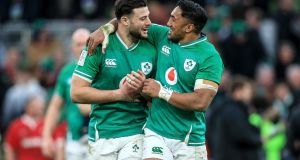 Robbie Henshaw’s performance for the 44 minutes before a clash of heads with Welsh outhalf Dan Biggar – they both failed HIAs – offered a timely reminder of his talent and big-match temperament.

Garry Ringrose’s fractured thumb, sustained in the game against Scotland, meant that Henshaw was handed the number 13 jersey. He filled it to telling effect and in doing so appraised his opposite number Nick Tompkins of the difference between an 11-minute cameo as a replacement against Italy, however impressive, and opposing a top-class international centre.

Henshaw and Bundee Aki reconstituted the understanding that underpinned their midfield partnership from their Connacht days, exhibiting the harmony of purpose, application and communication that allowed them to thrive individually and in tandem at the Aviva Stadium on Saturday.

It was to prove a lucrative platform from which Ireland could launch their ‘starter plays’ in attack, winning the collisions and getting over the gainline with impunity. They also worked intelligently to negate the Welsh threat, authoritative in the tackle and the manner in which they defended in general.

Henshaw discharges the role of inside centre with Leinster but he reminded any dissenters that he possesses the game management acumen to switch duties without a ruffle. Ireland’s desire to play more of the game in the wider channels at a higher tempo allowed Henshaw to escape the clutter of bodies that he is usually asked to pick his way through.

Instead his primary challenge for much of the first half was to find a way past or through Tompkins; he did both, something that would have hugely appealed to the Irish pack as they were invariably running forward to the next breakdown.

His first involvement was to put Jacob Stockdale away, giving the winger the time and space with an inch-perfect pass, to chip over the top and hustle a Welsh turnover; the upshot was an Irish five-metre scrum as Stockdale and Josh van der Flier collared Biggar over the Welsh line.

Henshaw’s input and impact was unrelenting, often popping up two or three times as Ireland cranked their way through multiple phases, attacking a variety of channels. He invariably broke the gainline, usually with Tompkins or Hadleigh Parkes clinging on for dear life. The fact that the Irish centre was in the ascendancy physically in that tete-a-tete, meant that Wales inside centre Parkes had to lend assistance.

Wales were caught narrow in defence and this was primarily due to the effectiveness of Ireland’s carrying in a 10-metre channel around the breakdown and also the physical problems that Aki and Henshaw were consistently posing. Aki sought to slam into Biggar and Henshaw isolated Tompkins leaving Parkes unsure of which way to turn.

A minor quibble was that Henshaw’s team-mates didn’t gamble and run a support line on his shoulder because, more often than not, the Leinster centre was also getting his hands free in the tackle. This was evident on a couple of occasions when firstly he popped the ball up off the ground to Iain Henderson and soon after managed to offload out of contact to CJ Stander, allowing Ireland to sustain their attacking momentum.

His ability to square up and attract multiple defenders meant there were spaces elsewhere, and as patterns become embedded and refined under Andy Farrell and Mike Catt it should prove a more lucrative asset in creating opportunities and potentially turning those into points.

Midway through the first half his strength in contact was once again evident, carrying a brace of tacklers for a couple of metres after the initial contact by dint of his power, leg drive and fight. Again there was a tiny regret that an Irish player didn’t insinuate his way between Henshaw and the covering Welsh player to maximise the breach. It should come with time.

Wales reacted by trying to get one or more of their backrow into midfield to try and shore up that area of the pitch, but it meant spaces elsewhere and it was striking how narrow the visitors got at times, enabling Ireland to get to the edges and supply Stockdale and Andrew Conway. Henshaw also demonstrated the other side of his game with a thumping tackle on replacement Johnny McNicholl that brought a Welsh attack to an emphatic halt.

Henshaw was prominent in the preamble to Conway’s excellent chip and chase, the winger set free again moments later following another pivotal intervention from the Leinster centre. When Wales did manage to get into the Irish 22 late on in the first half, he again demonstrated his defensive prowess, reading a mini linebreak and timing his contact with the ball carrier perfectly to force a knock-on.

His afternoon came to a premature end five minutes after the resumption when he was involved in a heavy collision with Biggar. The initial indication following prolonged treatment was that he had been winded but despite continuing briefly, both he and the Welsh outhalf departed for HIAs and neither returned.

Tompkins was probably the most relieved player on the pitch and to the Saracens centre’s credit, he featured more regularly, some of which would have been down to Wales getting an elongated foothold in the game. Keith Earls slotted into the centre – he showed great hands under pressure to get a pass away to Jordan Larmour – and while he got virtually no ball in an attacking context the visitors were afforded little traction when they tried to jemmy Ireland’s midfield.

Henshaw will follow the return to play protocols but with a fortnight’s break should be fit for the England game; he would like to take up where he left off, something that would have widespread appeal.