Ireland need another playmaker: opposition know if you can stop Sexton, you stop Ireland 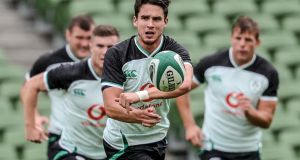 In what had been a titanic 2003 RWC semi-final, time was running out for New Zealand and Australia were seconds away from winning through to the World Cup final.

The great Australian scrumhalf, George Gregan, was standing up from tackling his long-time kiwi opponent, Byron Kelleher. A twinkle was in Georges’s eye, as he stood over his adversary and raised four fingers. “Four more years Byron. Four more years.”

Defeat. Failure. A dream is gone. George was feeding the monkey that was on the Kiwis’s back. “Four more years.” It remains an iconic sledge.

In the moments after Argentina had outplayed Ireland in the 2015 RWC quarter-final, those same words came crashing into Irish ears. Four more years.

That day there were key players absent that impacted on the team’s performance. That is undeniable. But the excuses put forward for Ireland’s eighth consecutive quarter-final defeat were shallow.

Sadly, the Irish rugby community, high on a toxic mix of blind faith and a mind-numbing dose of self-denial, lapped up the excuses. Nothing to see here folks. Move along folks.

Despite significant successes in the one-year cycle of the Six Nations, under the coaching of Joe Schmidt, Ireland are yet to prove that they are capable of delivering a winning four-year strategic plan. The proof will be the winning of the 2019 quarter-final.

The Six Nations Championship is iconic but the cold hard fact is that England are the only team from the north to have won a World Cup. The pressure to peak every Six Nations is so intense, it can hinder the long-term strategy required to attain success at the RWC.

In the southern hemisphere, the influence of the Olympic movement is massive. That has had an impact on their ability to strategise in 48-month segments.

This World Cup has unique opportunities. For the first time the home team, Japan, have no real hope of a quarter-final, so every real contender is playing away from home. That makes for an even playing field.

Secondly, the margin separating the top eight teams is the smallest I have ever seen, so the difference between success and failure will be exceptionally fine.

Ireland have two major factors against them.

Firstly they have a bad draw. On the current evidence, the two best teams in the world are New Zealand and South Africa. Ireland has to face one of these teams in a quarter-final. That is a very formidable task.

The Irish team of 2018 were capable of rising to that challenge and had proved they could defeat either of those teams.

These next few pre-World Cup fixtures are not friendlies

The 2018 Irish team unravelled in round one of the 2019 Six Nations. Eddie Jones implemented a strategy that nullified Ireland’s highly organised, but limited attack. Using a rushing defensive line, England belted the Irish runners behind the gain line.

With the ball in hand, England attacked Ireland’s short side. Combined with a brilliantly executed short kicking game from Owen Farrell, England literally tore Ireland apart. Before our disbelieving eyes, Irish confidence and form evaporated. The Ireland of 2018 disappeared.

The rest of the rugby world observed the English game plan as they rendered Ireland’s attack impotent. If imitation is the greatest form of praise, then Jones has been highly praised because Scotland, Italy and Wales all attempted to copy parts of the English plan.

I have no doubt that every team Ireland will face from now until the end the RWC will attempt to play a version of the English strategy.

Saturday’s match against Italy will allow us to observe if Ireland have strategised on their attacking structures to negate the rushing defensive systems that crippled their attack like kryptonite did to Superman.

Ireland need to add to their “go forward” options. A varied kicking game that must include short kicks to attack the space behind the rushing defensive lines is mandatory.

Oppositions are reading what the Irish offence are doing before they do it.

Ireland also need deception in their forward’s attacking shape and more than one attacking playmaker. Every wide Irish attacking play has Johnny Sexton as its originator. The opposition know that if you can stop Sexton, you stop Ireland.

Ireland need another playmaker to vary their attacking options. Before his injury Damian McKenzie did this brilliantly for New Zealand. Joey Carbery could do the same for Ireland. Ireland need variation not just of how they go forward but also who plays the “director” in that process. That’s a lot of work.

That means these next few pre-World Cup fixtures are not friendlies. These games are vital for Ireland to recover form and confidence. Ireland will defeat Italy. By how much is not important. The process of how Ireland attack is paramount if the Irish performances of 2018 are to be revived.

Twickenham and “The Arms Park” await. Defeat there will condemn Ireland to become just to another team making up the numbers as a ninth quarter-final exit beckons.