Still no clarity provided over Johnny Sexton’s involvement in Rome

Joe Schmidt: We arrived in Edinburgh late, and were late to most things thereafter 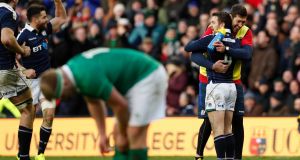 The Johnny Sexton scenario - will he, won’t he be fit - continues into week two of the Six Nations. Ireland coach Joe Schmidt was unable to provide any definitive news about the 31-year-old outhalf’s ongoing calf problem or whether Sexton will travel to Rome next weekend.

“To be honest I’m not sure at this stage,” said Schmidt. “Johnny wasn’t that far away so he could still come into the picture.

“But the more time Paddy (Jackson) gets running the team, like, the Six Nations is a bit different to what he has done in the past in South Africa.

“And it was tough for Paddy today. When you are not winning collisions and your ball is very slow it is hard to get things moving and running.

“It was the reverse for Finn Russell who I thought looked super in the first half but not so good in the second half because the landscape had changed.”

Ireland were late to Murrayfield, by a full 15 minutes, which Schmidt felt was pertinent information to reveal when asked what caused the

24-22 defeat that may, or may not, have derailed their Six Nations title aspirations on the opening day.

“We arrived about 15 minutes late to the stadium and we were late for most things all first half. We were sluggish and missed a few tackles.”

How come Ireland were late? The bus didn’t break down, they climbed aboard on time, so the mystery remains.

The squad are staying at the Balmoral hotel on Princes Street in the middle of this wonderfully intact medieval city. It is supposed to take 18 minutes to journey the 3.2 kilometres, by motor vehicle, from this luxury five star residence to Murrayfield.

“We certainly were on time leaving the hotel. It just took a long time. Those things happen, it’s certainly not an excuse for being late to things in the first half but it was probably just a reflection of the way the start of the day went for us.”

Woe betide the head of logistics or bus driver or police escort or whoever gets the blame for this delay.

Despite being ahead on the penalty county, while dominating possession and territory, Ireland trailed 21-8 at half-time as Scotland trotted off a try away from their bonus point.

“Basically everything we talked about doing we didn’t do. We got narrow in defence, we weren’t physical, we knew that they would come at us, we knew we needed to get front foot ball, especially the way they were set up that they would make life hard at the breakdown, we knew we had to get our ball carriers over the gainline.

“If you let a let a player like Finn Russell to take a couple of steps and throw twenty metre passes to guys like Hogg, Seymour, Maitland on the wing you are always going to be struggling.”

For certain, the Grand Slam and Triple Crown are gone for another year, and quite possibly the championship.

“We know we are not out of it,” Schmidt added. “We did pick up that bonus point and I think we just got to go to Italy now and make sure we get five or six points out of these first two games to get some real momentum into the back half of the championship.”