Eddie Jones: ‘It is always good to win when you do not play well’ 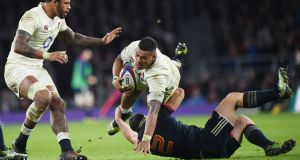 Head coach Eddie Jones will take full responsibility for what he described as England’s “awful” performance in their narrow 19-16 Six Nations win against France.

Defending champions England spent much of Saturday’s match trailing their French opponents following an underwhelming and ill-disciplined display at Twickenham.

But substitute Ben Te’o, appearing in the Six Nations for the first time, scored England’s match-winning try in the 71st minute before Owen Farrell’s subsequent conversion extended their run of consecutive wins to 15.

And while Jones insisted he was always confident England would prevail, the Australian knows his side must improve if they are to have any hope of retaining their title.

“It is always good to win when you do not play well, and we did not play well,” Jones said. “I take full responsibility for the performance.

“I did not prepare the team well enough. I got some things wrong and I have got a lot of homework to do over the weekend. I will make sure the team plays much better against Wales.

“They keep at it even when they are not playing well and things are not going right. It looked like we hadn’t practiced, but these things happen and we will get through it.”

England’s hopes of repeating last year’s Grand Slam triumph appeared destined to fail at the very first hurdle after France substitute prop Rabah Slimani crossed over in the 60th minute to give this visitors a 16-12 lead.

But a flurry of late replacements – with James Haskell, making his England comeback following a broken toe, and Teo’o chief among them – the game turn on its head to the delight of the home crowd.

“The bench definitely made a difference,” Jones added. “Haskell, for a guy that has played 35 minutes and 35 seconds this year was brilliant, and Ben Te’o did really well for us, too. I thought it was a great result from our 23.

“We have got a very strong bench and given that we have four of our top-class forwards out – and we can still bring on a bench that makes a difference – is a great testament to the depth of the squad. It is our first game of the tournament and we will improve.”

England’s run of consecutive victories is a new national record, but Jones, whose side face Wales in Cardiff next Saturday, will only be happy if they are crowned tournament champions.

“Records don’t mean anything” Jones added. “You score 100 in a Test and next day get out for a duck.

“We want to be Six Nations champions and that starts now by beating Wales next week and that is the only thing that matters. If we win the Six Nations I will stand up here and do handstands. I will be that happy.”