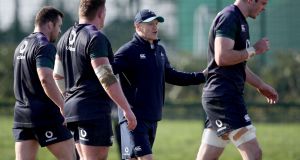 Just as winter officially gives way to spring, the weather does the polar opposite. But before it did so a refreshed Irish squad broke up from their sun-drenched three-day camp in Belfast with a sufficient spring in their step for Joe Schmidt to dismiss “irrelevant” comparisons with Ireland’s 2007 World Cup campaign.

That campaign was notable for scratchy wins over Namibia and Georgia, and a nine-point haul, before emphatic defeats by France and Argentina.

For all of Ireland’s woes in this year’s Six Nations to date, while bagging nine points from two of their last two away games against Scotland and Italy, Schmidt sounded more than a little scornful of that woebegone odyssey being suggested as any kind of reference point.

He said the gnashing of teeth amongst pundits and ex-players was not shared by the coaches.

“We’re pretty realistic about the group that we have, and we’ve mixed them up a fair bit,” he said, while admitting how “untidy we were with the ball in Rome”.

“We’re probably as dismayed and keen to start changing direction. We’re still confident that we can work our way through this, and deliver a couple of really good performances in the last two games of the championship.”

“You can only say in retrospect at the end of the championship whether we achieved that or not, but at the moment that’s what we’re driven toward. We don’t get too distracted by people making comparisons with a team 12 years ago.”

“It couldn’t be more irrelevant to us, because for us some of what we try to do is very much in the moment, and it is for eight days’ time or 10 days’ time. It’s not looking back 12 years to see what we need to learn. We’ll learn a bit from what happened in Italy, and then we’ll try to springboard from that into a really good performance against France.”

Reminding us that the bulk of this squad provided last year’s World Team of the Year, Schmidt said that this week was primarily about restoring confidence and decisiveness on the pitch, from which, he said, will come cohesion and accuracy.

Schmidt need only cite the dramatic upturn in French performances from their 44-8 defeat by England to their 27-10 win over Scotland, while making allowances for France being, well, France, and at the same time how this makes them an altogether different beast against Ireland on Sunday week.

“Yea, yea, I think they’ve got the balance right, unfortunately,” said the Irish coach ruefully, with particular reference to France’s latest in an ever-changing cast of half-back partnerships, the young Toulouse pair of Antoine Dupont and Romain Ntamack.

He added: “My son played a season with Romain Ntamack in the [Toulouse] espoirs a few years ago and he said to me then, ‘wow, they’ve got this kid who can play’.”

Also listing off the threats posed by a host of other players likely to feature against Ireland, Schmidt said “that is perfect for us” in their return to the Aviva.

“You cannot write the wrongs of a few weeks ago but you can, for want of a better word, change the direction of how we approach that game with the confidence that is required, and try and get on to the front foot.”

Despite word that Joey Carbery’s hamstring injury might well sideline him for the remainder of the Six Nations, Schmidt said the Munster out-half was in line for a return to training next week.

Both Carbery and Sexton were in attendance but restricted to light running at Friday’s session, and while Schmidt said Sexton would be “fine” and would train fully next week, Carbery was on track to do so by next Wednesday. “If he can train Wednesday and do Friday then that’s sufficient lead-in that he can be in contention.”

Dan Leavy, Robbie Henshaw and CJ Stander were also involved in the three-day camp in Belfast, with Leavy and Henshaw having trained separately on Friday morning.

The latter would have played for Munster this weekend but for the “tight calves” he suffered in Rome, while due to his recent “volume of work” O’Brien was “back with Leinster doing a conditioning week, and he’ll be back with us on Tuesday”.

Of Cronin’s bad day in Rome, Schmidt referenced his exceptional acceleration for a hooker, and added: “I don’t think I’ve ever seen a hooker who hasn’t had an off day throwing at some stage, but do they get written off because of it? I think you’d be crazy to do that after the good work that he has done.”

All told, 21 players (included 13 of the match-day squad in Rome) rotated in and out of the Irish squad against a more fully loaded under-20s squad in Friday’s typically full-on, open training session at Queen’s University.

Read what you will, but all the signs are that Ireland will bring a significantly changed line-up into the French game, particularly up front, with Healy, Best, Ryan, Henderson, Stander and Ringrose all liable to come back into the starting line-up.

1 Rory McIlroy steadies the ship after shaky start at US PGA
2 Alexis Sánchez joins Inter to save Man United €46.5m in wages
3 Andy Farrell raring to rekindle Ireland’s Six Nations title tilt
4 Harding Park, named after a lousy US president who never stepped foot on it
5 On healing and wild hurling: The re-education of Diarmuid Lyng
Real news has value SUBSCRIBE