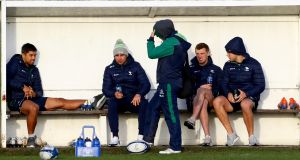 Connacht captain Jarrad Butler returns from a knee injury to lead the province as they travel to play Gloucester at Kingsholm on Sunday.

Butler came off the bench in last weekend’s Pro14 win over the Southern Kings in Galway and is now fit to start, as Connacht look to bounce back in Europe after their defeat away to Toulouse last time out.

Butler is joined in the backrow by Eoghan Masterson and Colby Fainga’a, while Quinn Roux and Joe Maksymiw start at lock. Denis Buckley, Tom McCartney and Finlay Bealham complete the pack.

Ireland outhalf Jack Carty returns to take the number 10 jersey with Caolin Blade at scrumhalf, while Bundee Aki - fresh off the back of his new contract - is joined by Peter Robb in midfield.

An injury to Matt Healy means John Porch starts at fullback, with Kyle Godwin and Niyi Adeolokun on the wings.

Meanwhile for the hosts, Danny Cipriani starts at outhalf while former Munster forward Gerbrandt Grobler is named at lock.

Ahead of the trip to Gloucester, Connacht boss Andy Friend said: “The back to back fixtures in this competition are always critical and the next two weeks against Gloucester will decide our Champions Cup season.

“Next week will be a huge occasion but first we have to get a result on Sunday. For now, we are solely focused on that away leg and we are travelling to Gloucester with the belief that we can win the game.

“It is great to have Jarrad Butler back in the side. As our captain he has a massive influence on the group and his presence will be important for such a big occasion.

“We have also made a few positional changes to our side. Matt Healy picked up a knock in training so John Porch will slot in at full back and Kyle Godwin moves to the wing. We have used over forty players so far this season so we know the depth that we have and that will be tested again in the coming weeks.”