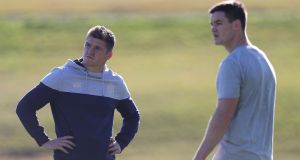 World Rugby sounding a dire warning about the demise of Test rugby seemed more bark than bite on Wednesday. When former Argentine scrumhalf and World Rugby vice chairman Gus Pichot mooted that the international game would have to pivot and the financial model change in order to save the players and clubs, the wonder was which players and clubs he was talking about. And who was listening.

The guess is, as he didn’t say, are those internationals that play in the Top 14 and English Premiership. Pichot was aiming at owners, and those in England have already indicated the season will extend to the end of June from 2020.

Leading players campaigning for fewer matches and shorter seasons were already warned last year by Exeter coach Rob Baxter to wake up to the economic realities.

“Premiership rugby is not some business that is making millions,” he said. “The players aren’t being exploited because no one’s making any money out of it. Why are we trying to put in more fixtures? The truth is that most Premiership rugby clubs are haemorrhaging money. Player welfare is important but you’ve got to look at the bigger picture. There’s no point talking about the welfare of players who might not be professional players in two years because they’re at a club that goes bankrupt.”

How many games does a club need to break even, asked Pichot. The answer to that is it depends where you play rugby and what team you play for.

After just two rounds of the Pro14 and the Premiership, the difference in workload between the Irish players that toured Australia in the summer and the England players who travelled to South Africa is stark.

Every English player but Kyle Sinckler, Nathan Earle, Ellis Genge and Jonny Hill have played for their club in one match, 24 players have taken part in two matches and 11 players, including Owen Farrell, Maro Itoje and Joe Launchbury, have played for the full 80 minutes in both games.

Of the 32 Irish players that toured Australia, 14 have yet to lineout for their province and only two players, Leinster outhalf Ross Byrne and Ulster scrumhalf John Cooney, have played the full 80 minutes in both opening matches.

As high-profile players go there are few more recognisable than Johnny Sexton and Owen Farrell. Last season the Leinster and Ireland outhalf played 714 minutes over 12 matches for Leinster in the Pro14 and European Champions Cup.

Sexton played a further 673 minutes covering 10 international matches. Just twice did he play for the full 80 minutes at international level, against France and Australia. The outhalf’s seasonal total was 1,387 minutes over 22 matches.

In total, Farrell played 2,331 minutes to Sexton’s 1,387. Injuries can skew the figures but there is a consistency to time spent on the pitch between Premiership and Irish players. Last season Farrell played 944 minutes more than Sexton did. That figure equates to 11.8 matches of 80 minutes duration.

For the forwards, the trend is similar. In the 2017-18 season, Irish and Leinster lock James Ryan played 15 times for Leinster for a total of 762 minutes. He also played in nine international games totalling 594 minutes. In all, his season’s workload was 1,356 minutes.

Ryan’s counterpart in Saracens, England lock Itoje, played 14 times for his club for a total of 1,045 minutes.

In 10 of those matches he played for the full 80 minutes. Combined with his England duty and the European Champions Cup where Saracens were beaten by Leinster at the quarter-final stage, effectively round seven, Itoje competed in 29 matches totalling 2,214 minutes, or, 858 minutes more than Ryan.

In terms of time spent on the pitch it equates to almost 11 matches more than the Irish secondrow.

“My view is that players cannot carry on playing as they are now. You cannot have them playing 30-odd competitive club and international games just because you want bums on seats,” Pichot said this week.

His idea now is to have a meeting in Sydney later this month and come to an agreement that will make the Test game more viable by amalgamating the November and June Test windows into one block.

But from 2020 onwards, Premiership sides playing to the end of June with the Test window set for July spells conflict. Whatever happens at the meeting in Sydney, the power-brokers will all arrive with entirely different agendas. One thing that is certain is Ireland’s player welfare policy is protecting players from long hours on the pitch and potentially shorter careers. For others the idea of 25 matches a season and eight weeks off to recover, increasingly a pipe dream.