Munster carrying on as normal amid coronavirus uncertainty 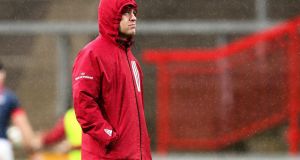 After they return from the break, Munster are set to face-off against Benetton Rugby at Stadio Monigo on March 21st while in Round 15 the Italians are set to visit Cork for the return fixture, six days later.

Both of those fixtures now look in doubt, after Ireland and Italy’s Six Nations game was postponed and the Pro14 were forced into doing likewise with Benetton and Zebre’s weekend fixtures.

And any of the future Pro14 postponements, due to the coronavirus outbreak, will result in a 0-0 draw with both teams getting two points match points.

But as Munster try to chase down Edinburgh at the top of Conference B, van Graan says they will focus on what they can control in the coming weeks.

“The guys are going to be away for a week now. Obviously this away week was always planned. The guys will go on holiday and once they are back in a weeks’ time we have got a week to prepare,” said van Graan.

“Firstly, we will just go with whatever Pro14 and Ireland decide we need to do. The importance of the health of not only the players and management, but all people around the world are important.

“We’ll just adapt to whatever we need to. Whatever that means, whatever that looks like I guess nobody knows at this stage.

“From our point of view, we’ll just prepare the way that we can and whatever happens in the competition I guess life is more important than rugby.”

Munster had to win on Saturday to keep up pace with Edinburgh, who are now just two points clear, and denying Scarlets a losing bonus point has opened up an eight-point gap back to third.

Scarlets were rocked by the sending-off of second row Sam Lousi who saw red after a punch on Munster’s Fineen Wycherley.

Munster went into half-time with a 10-3 lead following Jack O’Sullivan’s subsequent try and Billy Holland added another in the second half.

“We have got some very good loose forwards that are younger, Coombsie, Jack O’Sullivan, John Hodnett, so getting game time for those guys is pretty important,” said van Graan.

“I said to Coombsie at the start of this block ‘I’m going to pick you on the lock, even though you’re a loose forward you’re going to fulfil that role’.

“He did that really well. I thought he carried really well over the last few weeks, if you remember the carry against the Kings, the way he carried against Zebre and again, excellent performance.”

Munster were dumped out of the Champions Cup in late January but their first piece of silverware since 2011 still looks on, in the league.

Most of their international contingent remained in Irish camp this week with Andy Farrell, even despite the cancellation of next weekend’s game at Aviva Stadium.

But Jack O’Donoghue and Chris Farrell were released back to try and make an impression ahead of the French game.

O’Donoghue didn’t play on Saturday after he aggravated an existing neck injury but van Graan was thrilled to see Farrell make an impact in the centre.

“Jack is okay. We weren’t going to risk him, he took a bang last week at national camp to the neck and he didn’t do any contact training,” said van Graan.

“Look, he wasn’t ready to go out and play tonight so that’s what we didn’t select him.

“It was a difficult game for the outside backs specifically. Chris carried really well specifically in the 22, and we tightened up really good defensively. If you look at the team from the last few weeks, a lot of experience like Niall Scannell didn’t play.

“So we have picked up quite a few injuries, but Chris is a senior member of our squad. He and JJ Hanrahan specifically in the back line linked really well in terms of communication and leadership.”

1 Royal Portrush: Golf clubs ‘in real distress’ as eyes turn to 2021
2 Rodgers shunned by some family members for leaving Celtic
3 Colin Kaepernick’s exile is too fresh for NFL to speak out on US protests
4 Connell losing touch with club championship is real tragedy of Normal People
5 Ger Loughnane and the spark that lit Clare’s hurling revolution
Real news has value SUBSCRIBE