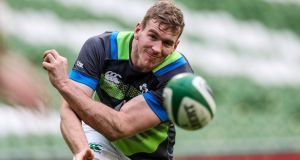 15 Andrew Conway
Age: 26
Height: 5’11”
Weight: 90kg (14st 2lbs)
Caps: 4
Points: 5
He played all his underage representative rugby as a fullback and has worn the jersey with distinction for Munster too. He’ll relish this opportunity.

14 Darren Sweetnam
Age: 24
Height: 6’
Weight: 95kg (14st 13lbs)
Caps: 1
Points: 0
A fine cameo on his debut last week against the Springboks as a second half replacement he’s quick with nice balance and a step.

12 Stuart McCloskey
Age: 25
Height: 6’3”
Weight: 109kg (17st 1lb)
Caps: 1
Points: 0
He’ll form part of the biggest and heaviest midfield ever fielded by Ireland. He deserves his chance as he has been in consistently excellent form for Ulster this season.

11 Dave Kearney
Age: 28
Height: 5’11”
Weight: 91kg (14st 4lbs)
Caps: 16
Points: 15
His last appearance for Ireland was in a Six Nations game against France in February of last year. He’s had a ridiculously tough run with injuries over the last 20 months. This represents a big opportunity.

10 Joey Carbery
Age: 22
Height: 6’
Weight: 88kg (13st 12lbs)
Caps: 5
Points: 10
An extremely accomplished footballer as he showed in his late cameo against the Springboks including nailing a touchline conversion. He’ll look to prove today that he can management a game from the get-go.

9 Kieran Marmion
Age: 25
Height: 5’10”
Weight: 85kg (13st 5lbs)
Caps: 17
Points: 15
He’s very quick across the ground as he demonstrated in two of Ireland’s three late tries against the Springboks, has a good delivery and just needs to polish kicking game.

1 Jack McGrath
Age: 28
Height: 6’1”
Weight: 118kg (18st 8lbs)
Caps: 41
Points: 10
He’ll be keen to vent the frustration of missing out on the game against South Africa this evening and proving that he’s firmly in the mix to contest for the starting jersey against Argentina.

2 Rob Herring
Age: 27
Height: 6’
Weight: 106kg (16st 9lbs)
Caps: 2
Points: 5
Having made his debut as an emergency backrow replacement about three and a half years ago he was delighted to mark his second cap in his traditional role at hooker and cap it with a try.

3 Andrew Porter
Age: 21
Height: 6’
Weight: 120kg (18st 12lbs)
Caps: 2
Points: 0
The baby of the team and a bonnie one at that, he’s handling the switch across the frontrow with an impressive maturity. He’s brilliant in the loose, strong, quick and powerful.

5 Devin Toner
Age: 31
Height: 6’10”
Weight: 124kg (19st 7lbs)
Caps: 51
Points: 10
He ran the lineout very well against the Springboks last week and should find it a bit easier against Fiji and the goal will be to nick a few on the opposition throw.

7 Jordi Murphy
Age: 26
Height: 6’2”
Weight: 106kg (16st 9lbs)
Caps: 17
Points: 10
He returns to the Irish team for the first time since tearing his cruciate knee ligament in a try scoring 26-minute display in the famous win over the All Blacks in Chicago.