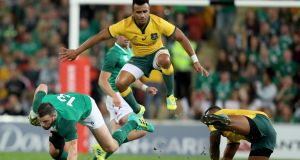 Ireland’s Robbie Henshaw is tackled by Will Genia and Marika Koroibete of Australia at the Suncorp Stadium, Brisbane. Photograph: Dan Sheridan/Inpho

One that finally got away. All good things must come to an end, and so it came to pass on a balmy Saturday night in Brisbane that Ireland’s record 12-match winning sequence came to a shuddering halt. That seems an apt enough description given some of the big hits with which the bruising Wallabies drew a line in the sand in the opening skirmishes.

It’s said you learn more from your defeats than your wins and in the greater scheme of things, this loss may even be no bad thing, all the more so if Ireland learn sufficiently to level the three-match series in Melbourne next Saturday.

Ultimately, with Bernard Foley and the ever-dancing, ever-probing Kurtley Beale interchanging off often quicker ruck ball through the physicality of their carriers, the Wallabies attacked the edges quicker.

They scored two tries to none, and would have had two more from their ability to swiftly attack wide off turnovers but for Jacob Stockdale’s covering tackle on Marika Koroibete and Israel Folau having his finish ruled out due to Adam Coleman taking out Iain Henderson off the ball.

Yet it was hard to dispute Joe Schmidt’s repeated refrains that “the margins were so skinny”. This was particularly true of the 43rd minute, out-and-in break by CJ Stander off Bundee Aki’s cleverly delayed pass when first failing to locate with Rob Herring’s switch inside and then adjudged not to have grounded the ball. Coupled with one missed penalty by Joey Carbery, Ireland had a three-point return, rather than 13, from their third-quarter supremacy. Unusually, they missed a trick there.

Carbery looked composed, moved the ball well, used his footwork in traffic and tackled well, even if there was one loose pass and that 36-metre miss before kicking Ireland in front with his third penalty. It was an invaluable long-term investment.

That said, Johnny Sexton’s cameo reminded us he takes the ball to the gain line and both surveys his options with understandably more savvy. He’ll ask more of the Wallabies in Melbourne.

Alongside them, considering he was undercooked more than most, Bundee Aki dusted off the cobwebs to mix ferocious carrying (43 metres off 19 carries) and tackling (nine made, none missed) with some nice passes and offloading, even if he possibly held once or twice too often.

Aki, like James Ryan and CJ Stander, was still carrying hard into the 80th minute and beyond. That Ryan suffered his first defeat for Leinster or Ireland was hardly his fault. He made a phenomenal 43 metres from 16 carriers, and was again leading tackler with 15 and one rare miss (spotted by Schmidt, not by Opta). Peter O’Mahony also put in a good shift, and his deft handling game was used, along with one grubber.

Ireland unveiled some nice spot plays, and also made nine line breaks to eight, but Stockdale (twice) and Conor Murray kicked the ball dead, while Rob Herring (whose excellent darts contributed to a fine game) failed to hit Robbie Henshaw with an offload. Henshaw also kicked to touch while David Pocock and co increasingly slowed down ruck ball or forced turnovers. All unlike this Ireland.

Defensively, the Aussies put in a huge shift after just a one-week window with defence coach Nathan Gray. By contrast, Ireland were more vulnerable out wide. Henshaw also put in a big shift, but was understandably self-critical of his two defensive blips in the first-half – first missing Kurtley Beale before Stockdale saved his blushes, then misreading for Bernard Foley in the build-up to the latter’s try.

“Australia hold their width incredibly well in attack,” said Henshaw. “Playing out there, it feels like they always have overlaps and they spread the width really well. We were a little bit narrow in defence and I think it left me with some decisions to make – whether to shoot in and try and pressure the pass or to hold off and concede yards on the edge. These are things we practise and we need to be able to deal with them in the moment.”

The aerially peerless Folau caused Rob Kearney, who looked out of sorts in a wobbly spell before half-time, and co untold grief in the air, and the tangible return was huge. He earned the Wallabies a debatable opening penalty, may have contributed to Kearney misreading a box kick prior to Foley’s try and Folau’s take from Foley’s crosskick above Stockdale was the launching pad for Pocock’s try.

The prospect of defeat, unless they scored twice late on, brought out some of Ireland’s best rugby. After a good carry by Henshaw, Tadhg Furlong bumped Beale and offloaded to Aki. It took three men to haul him down before Tolu Latu played the ball on the deck. But instead of a yellow card and a penalty under the posts, Mariuks van der Westhuizen adjudged Murray had knocked on, even though it happened undetected under his nose.

The South African referee also allowed the Wallabies to scrum at an angle towards the Irish tight-head with impunity throughout, even rewarding this with a scrum penalty from which Foley nudged Australia in front.

“What they did was exactly what we were expected,” said Schmidt, before adding dryly: “We probably didn’t expect them to quite spin the scrum like they did.”

With time and the game up, Kieran Marmion was also denied a consolation try by Stander’s supposed knock-on, which, citing another camera angle, was visible to TMO Ben Skeen but no one else in the ground or watching on TV.

Imagine the furore if that bizarre ending had decided the match? For this alone, thankfully, time and the game was up for Ireland by then.

Ghaiyyath retired to stand as a stallion at Kildangan Stud 17:28
Masks, loads of parking and no people: Covering GAA in a pandemic 17:24
Wexford GAA say some clubs ‘let association down’ with social activities 16:37
O’Brien well set to land a 10th Vertem Futurity 16:09
IRFU will charter plane for women’s team to France 16:11
Crossword Get access to over 6,000 interactive crosswords