Schmidt acknowledges major improvement will be required against the All Blacks 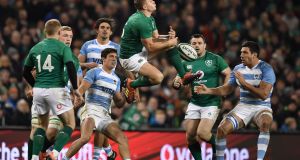 Jordan Larmour fumbles a catch during the international against Argentina at the Aviva Stadium. Photograph: Charles McQuillan/Getty Images

The floodlights were still on and the crowd had only begun to disperse yet one ventures most thoughts had already turned to events at the same venue next Saturday. This was the perfect preparation in many ways, not least in its imperfections.

Playing their first game for five months, Ireland looked understandably rusty, as against an Argentina side coming off the back of both Super Rugby and Rugby Championship campaigns together.

Put another way, the Pumas had played six Tests since Ireland had last played, and a week out from meeting the All Blacks, whose winning margins over the Pumas this year were 22 and 18 points, this was a very useful road test.

“I think it demonstrates that we need to get the car turned,” admitted Joe Schmidt on Saturday night. “We’re going to need the cohesion that a smooth-running vehicle has. What we can’t do is have untidy elements of the game because they love to play off those, when things become unstructured.

“At one stage, I can’t remember the player, but, he chipped over the top and Kieran Read gave it to Damian McKenzie with jets on, going in the other direction,” said Schmidt of McKenzie’s slicing, counter off turnover ball in the second half against England at Twickenham on Saturday.

“Owen Farrell got back and managed to knock the ball out of his hands, but I just think that if we’re untidy as we were tonight, it’s going to be a very tough, tough day at the office. We have to tidy up a number of elements of play.

“I thought there was some really good stuff as well. Maybe, it’s the expectation we have of our selves or that you guys have of us now that we come out and hit the ground running every time. It’s tougher to do than that.

“We got back from Chicago on Monday. We trained pretty quietly on Tuesday. Then, it was into training on Thursday and I felt we trained reasonably well. I was hopeful a few things would work out alright and enough worked out alright to beat a team that have just finished a Rugby Championship together.

“Talking to Mario [Ledesma], they had two weeks off. Then, they had two weeks to prepare for us. They are a really good team. To come through that and get out the other side, the players merit a little bit of respect on the back of that. Then, also, they will merit a few tidy-ups as well.”

While one ventures that Schmidt felt compelled to leave key men such as Johnny Sexton, who stuck to his task despite a mixed kicking day out of hand, and James Ryan on longer than he would have ideally liked, having a win with ‘a few tidy-ups’ is just how he would like it too.

Ryan was astonishing, making 18 carries for 28 metres and also making 13 tackles, all the more praiseworthy given the congested traffic he operates in, with only CJ Stander (25 metres from 20 carries and 14 tackles) rivalling those numbers.

His willingness to show up for the ball, mostly as a first receiver, is matched by his sheer strength, his body shape in contact and his ball presentation. He is now a vital component of Ireland’s hard-running game.

“Yeah, I thought he was massive in the second half,” said Schmidt. “How he carried through some of that traffic, I’m not sure, then he carried and he carried again. He’s a super young kid and I think he’s pretty sore now. Certainly he got through a volume of contact that will earn him a couple of days to recover and then build again toward the All Blacks.”

Yet, on this evidence, the Pumas’ defence is improving and they are well coached, for Ledesma had clearly done his homework. They identified Jordan Larmour’s running threat and their pressing defence and kicking game afforded him no space save for one loose kick by Tomás Cubelli to Larmour which eventually led to a 20-phase attack, Peter O’Mahony’s lineout steal and Luke McGrath’s match-clinching try.

The Pumas also went after the Rory Best throw with a third lock, but there remains the nagging concern that all of Ireland’s three tries emanated directly from the Pumas’ scrum being obliterated close to their own line.

Save for the ensuing tries by Kieran Marmion, Bundee Aki and Luke McGrath, Ireland didn’t manufacture one clean line break in the match, whereas the Pumas more varied running game conjured half a dozen, including the beauty concocted by the excellent Nicolás Sánchez, Jerónimo de la Fuente, Matias Orlando and Bautista Delguy which eventually led to the latter’s try.

Never mind the All Blacks, Ireland will rarely ever encounter a more callow front-row as they did last Saturday. Missing four front-line props the Pumas were obliged to play a 22-year-old tight-head, Santiago Medrano, in his second Test start, with his 20-year-old replacement, Lucio Sordoni, making his debut off the bench.

On the other side of the scrum, the replacement Juan Pablo Zeiss had only been converted to loosehead two months ago according to Mario Ledesma. The former Pumas’ hooker, who won 86 caps in a stellar career, acknowledged it was a risk but one he was prepared to take and vowed that it would reap a reward.

Ledesma has three more matches on this tour, against France, Scotland and the Barbarians, plus next year’s Rugby Championship, to get their scrum right. It’s almost a cliché at this stage to say the Pumas peak at World Cups (in the last three they have reached two semi-finals and a quarter-final) but if Ledesma does, and you wouldn’t back against him, they will again be a serious threat.

They are in a rather tasty group – with England, France, the USA and Tonga – but they have the attacking wherewithal to open any defence and the cutting edge to finish those chances.

As well as fitness and bench impact, Ireland’s discipline was, as usual, significant, witness a 12-6 penalty count, and this after conceding only three penalties last week, albeit the one conceded by Dan Leavy when hand-tripping Emiliano Boffelli was somewhat un-Irish.

Much like aspects of their play, such as handling errors and crossed wires, they will be fine-tuned this week.