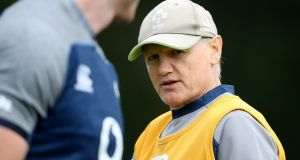 Ireland head coach Joe Schmidt isn’t dealing with ‘Time To Go Joe’ headlines, not least because we already know he’s going after the World Cup. But there’s no getting away from how ardour has cooled. Photograph: Dan Sheridan/Inpho

Worship of Joe Schmidt has come a long way from the Messianic heights of last November although Saturday’s World Cup warm-up win in Wales has provoked a rally from the depths of the previous week’s defeat to England. Now there could be a plateau of perspective Schmidt can work from. But 2019 has given Ireland’s rugby coach an eye-opener into how the worm of public opinion can turn here.

After all it’s less than 10 months since Schmidt had a spot at the country’s sporting bosom that perhaps only Jack Charlton has ever previously secured. On the back of a Grand Slam and defeat of the world champions in our own backyard, not to mention Chicago and a couple of championships, Schmidt could have asked for anything and been pressed for seconds.

To hell with any baleful history of failing to pass the quarter-final mark before, it was full steam ahead to Japan and World Cup glory. The All Blacks coach Steve Hansen said Ireland were the best team in the world and it was too difficult to disagree, never mind ponder if he was setting us up for a fall. After all we had our own Kiwi, the most vital cog of all in the Irish machine.

For a little country, hyper-aware of the local, we’re suckers for placing our hopes and dreams into the hands of overseas coaches we decide to adore. So when they actually deliver it’s like they can do no wrong and Schmidt delivered like a postman working on commission.

It was like Italia 90 when Charlton famously wound up credited with near metaphysical powers of transforming national identity. That the voodoo seemed to mostly consist of roaring at players to belt it up to the big lad got lost in a fog of adulation when Irish soccer tasted rare success and respect.

But every jockey knows the more you eat the hungrier you get and it didn’t take long to tire of the Charlton diet. It wasn’t even results but the style with which they were got. Used to meagre rations it didn’t take Irish fans long to turn into gourmands and blistering critics of the blustering head chef.

Both Charlton and, subsequently, Giovanni Trapattoni found out how if Ireland rushes to acclaim then there’s also no place quite like it for the flip side. It’s a dizzying ying-yang that ignores how dumb it is to project supposed third-eye powers to figures whose professionalism inconveniently fails to stretch to the supernatural.

Schmidt isn’t dealing with “Time To Go Joe” headlines, not least because we already know he’s going after the World Cup. But there’s no getting away from how ardour has cooled. Blind devotion to the man at the helm has been replaced by needy keening for reassurance. Saturday’s performance was encouraging and a timely reminder of how results always dictate everything, a mundane reality that makes some of the more feverish acclamations from before seem even more glib.

It’s to Schmidt’s credit that this reality check looks like it might actually be a relief. The more extreme puddling was embarrassing there for a while. And in purely rugby terms Saturday’s result has the potential to renew momentum by putting a brake on some of the fretful narratives being flung around.

Such as the postulation that the Irish rot only set in when Schmidt announced shortly after the All Blacks victory that he would step down after the World Cup, the argument being that he compromised his authority by doing the same thing Alex Ferguson did with his premature retirement at Manchester United.

It’s a neat fit that coincides with some circumstances. It’s not like rugby players are immune from the temptation of getting away with what they can inside their own professional cocoon. After all it is a rather Premiership vibe when Leinster stars can’t be released into the wilds of Donnybrook for a drink without being babysat by security guards.

But there’s still a crucial difference between a commercial football club and a national side, even one with central contracts. Rugby thrives on the shoulder to shoulder, men in the trenches bit. But after Roy Keane’s recent visit to the England rugby team he might be persuaded to come home and remind his compatriots of how international players ultimately play for their country not their coach.

Then there’s the line that Ireland have peaked a year too soon, like it’s simply a question of timing a run to Tokyo. Schmidt’s a racing fan. He knows about getting racehorses to peak for a big day. Even then form is elusive and fluctuating. The idea of precisely timing a squad of 31 players to somehow miraculously peak at the one time is far-fetched.

Certainly the notion that a supposed group of world-beating talent simply not being inspired by the man in charge feels like a convenient cop-out.

Perhaps it’s all a pitifully two-eyed view but it could be worth considering how over five years the national coach moulded a good crop of Irish players into playing effective if unspectacular rugby that yielded spectacular dividends. It was a result of supreme professionalism, huge hard work and getting players to do what he wanted; no more than that but certainly no less.

That there’s been a dip in results and performances so far this year doesn’t make Ireland, or their coach, a busted flush.

Form can go but also come back. The older established players on whose shoulders so much rests may have a final glorious kick in them if staying injury-free. They World Cup only requires you to be the best team for half a dozen weeks.

Just as importantly their coach has surely got enough overachievement in the bank to allow him get on with the task of trying to deliver on what may still ultimately prove to be over-inflated expectations.