Few members of Schmidt’s side enhanced reputations in disappointing campaign 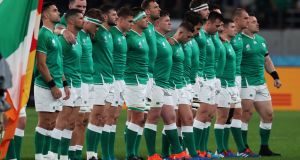 Ireland travelled to the Rugby World Cup in expectation only to have their hopes dashed following a familiar exodus at the quarter-final stage. The initial adrenaline surge following the victory over Scotland proved to be a misdiagnosis of Ireland’s rugby wellbeing, a fact first Japan and then New Zealand ruthlessly exposed.

Compiling the end of term report is a flawed process, offering nothing more than a soundbite, but what’s unarguable is that very few Irish players emerged from the tournament in Japan with reputations enhanced; the majority underperforming based on standards they have set in the past.

Ireland’s simplified lineout where winning ball rather than taking riskier options was the priority functioned well, he led with clarity and on general play deserved his starting place. Rating: 6

Two starts, three matches off the bench, his performance against Samoa at blindside flanker best exemplified his obvious quality without really being given a sufficient platform to earn a starting spot. Rating: 5

He came on for an injured Peter O’Mahony in the Scotland game and excelled to a point where he was a likely starter against Japan before injury ended his World Cup. Rating: 6

Two games and 41 minutes in total off the bench, he was very much third-choice hooker before injury removed him from the equation in New Zealand match week. A frustrating tournament for him. Rating: 4

Showed flashes of his best form, none more so than the barnstorming try against Scotland, his work-rate was voracious and he locked out the scrum but didn’t get enough chances to use his hands and power in wider channels. Rating: 6

He discharged the basic duties capably but rarely managed to find the space to use his power and footwork to best effect and was usually called ashore around the 50-minute mark. Rating: 5

He only arrived out as a late replacement for the injured Sean Cronin and was confined to a couple of training sessions in New Zealand match week. Rating: N/A.

Ireland’s lineout caller played in all five matches, started four but only once lasted the 80 minutes; he didn’t broach the standards that his talent offers when at his best. Rating: 5

One start, he played in all five matches adding huge value on both sides of the ball on his arrival. There is a difference between starting and coming on but he’s pushing hard for the number one jersey. Rating: 7

Copped some unfair flak over being picked ahead of Devin Toner, something that his lack of game-time merely accentuated. Solid and worked hard in clearing rucks, his carrying and footwork need to improve if he’s to get further opportunities. Rating: 4

Summoned to the tournament as a replacement for the injured Jack Conan and then invalided out of the tournament after just 27 minutes of the game against Russia; very unfortunate in every respect. Rating: 4

Competed with every fibre, no one could fault his work ethic or application but he only finished one game that he started and his best performance was arguably at openside flanker, a role for which he may compete rather than blindside going forward. Rating: 6

He is maturing into a top class international as evidenced by his work when coming on in all five matches. The key decision going forward is which side of the scrum he should play to maximise his all-round impact. Rating: 6

Scored a try against Russia in his only start but demonstrated in his two cameos against Japan and New Zealand why he merited a place in the run-on team. Rating: 7

There is a benchmark level of performance beneath which the young secondrow doesn’t dip no matter how tough the conditions and while he wasn’t consistently at his soaring best, he remains one of Ireland’s standout players and a future captain. Rating: 7

His only outing was 58 minutes against Russia, a match in which he played well and therefore not a reflection on his lack of contribution for the rest of the tournament. Rating: 5

Understudying the captain always meant that his game time was going to be limited and that’s exactly how it panned out. He performed capably during those opportunities. Rating: 5

The 373 minutes across the five matches when weighed against the manner in which he plays the game was a staggering physical effort, both in attack and defence. Footwork and passing remain issues but it’ll be interesting to see if he shifts across the backrow going forward. Rating: 6

Another player who deserves huge credit for his physical durability. For Ireland to maximise his particular skills, there needs to be a shift in the way they play the game with an emphasis on more expansive philosophy as in the past. Rating: 6

Forced off with a head injury after 22 minutes against Scotland, he played a full game against Russia before his sending off against Samoa, making for a fractured World Cup. Rating: 5

Showed flashes of his innate football ability but limited to cameo roles when coming off the bench three times: forced to chase things in the Japan and New Zealand games. Rating: 5

Started against Japan, got 40 minutes against Russia and a little over 20 in the opening win over Scotland. Some excellent individual moments, the challenge going forward is to improve game management. Rating: 5

Scored tries in all three games he played, appreciably the form wing in the squad, and that should have earned him a starting place in the New Zealand match. Rating: 7

Having missed the Scotland match he played the remaining four games. His brilliant cover tackle on Kenki Fukuoka was a high point but underutilised in attack he occasionally tried to force matters and that led to mistakes. Rating: 5

Superb when coming on for Aki against Scotland, he had a decent game against Japan in difficult circumstances; based on tournament form he had a strong claim to a place for the All Blacks match. Rating: 6

Injured travelling to the World Cup, it was a tough ask for him to try and go from nought to typically excellent in that timeframe given his lack of match sharpness and his performances were fitful; a try and a few uncharacteristic errors. Rating: 4

Two tries in his three tournament games, including a smart line and finish against Japan, he was typically assured in fulfilling the basics but lived off scraps in attack. Rating: 6

He played a part in all five matches and showed impressive maturity to complement his dazzling footwork, pace, ability to beat defenders and an appreciation of teammates’ running lines. Rating: 7

Started one match and came off the bench in the other four, but he wasn’t really given a fair chance to compete for the jersey based specifically on match minutes and the timing of his introduction. Rating: 5

Four starts, kicked a conversion, gave a brilliant scoring pass for a Jordan Larmour try but like several players, he hasn’t reclaimed his best form or rediscovered the threat he used to pose around the fringes. Rating: 5

Four starts, two tries and with the exception of the All Blacks match when every Irish player was under the gun, he enjoyed a reasonably good tournament. He needs to be an attacking fulcrum going forward. Rating: 7

Up until the New Zealand game he lived up to his billing as a hugely influential talisman for his country. His poor performance in the quarter-final was so untypical. Rating: 6

It’s criminal given his attacking prowess that he spent the tournament on the periphery in that part of the game. His frustration probably shone through in his impetuosity at times in defence. Rating: 4