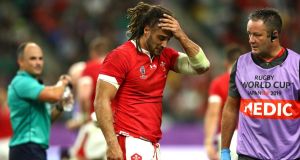 Josh Navidi will miss the rest of the Rugby World Cup with a hamstring injury. Photograph: Michael Steele/Getty

Wales are set to call a back into their World Cup squad as a replacement for hamstring injury victim Josh Navidi.

Back-row forward Navidi will miss the remainder of the tournament due to an injury that forced him off during a 20-19 quarter-final victory over France on Sunday.

In terms of a replacement for Navidi, Wales head coach Warren Gatland said: “No, it won’t be a back-rower. Probably someone in the back-line.

“We haven’t made that decision yet. We’ve just got to wait until we get that approval from World Rugby and then look to bring someone in.

“We’ve got six back-rowers, and we’ve got five fit at the moment. We have been a little bit short in numbers in the backs, so it probably will be a back who comes out as a replacement.

“It’s a grade two hamstring, so it’s at least a couple of weeks.

“It’s disappointing for him (Navidi). Hopefully, we will keep him out here. Obviously, he loses his accreditation, but since he’s gone so far in the tournament it will be nice for him to stay out for the next couple of weeks.

“He has been very influential and important for us in the last year. It’s disappointing to have a player ruled out, but in saying that, these games are so physical and to have only one player ruled out at this stage is a real positive for us.

“We’ve got a meeting tonight to decide who that potential replacement will be. There are a number of options.”

Gatland, meanwhile, said that centre Jonathan Davies — who missed the France game due to a knee injury — will “hopefully be up and running” for training on Tuesday.

Wales have arrived in Tokyo with the dust still settling on a last-eight encounter that France led until the 74th minute, before Ross Moriarty’s try and a Dan Biggar conversion edged them home and booked a semi-final against South Africa.

“We are fairly familiar with South Africa and have had a fair bit of success against them,” Gatland added.

“We’ve had some close encounters in recent years and had some good success. We’ve got to park last night and say we’ve played our get out of jail card and get excited about this weekend.

“It’s about getting us mentally and tactically right this week and being smart in the way we train.

“There will be no lack of motivation or adrenaline for the match, so it’s pretty important we manage the players well this week and tactically get ourselves right for South Africa.

“They pose different threats to some other teams. There was a period a few years ago where they were trying to emulate the All Blacks or Australia; trying to be a bit too expansive in the way they played.

“They’ve gone back to their strengths, and their strengths are definitely that physicality up-front with driving lineouts and a strong scrum and ball-carrying.”

Asked if he felt the current tournament was the best chance Wales have had in a World Cup, Gatland said: “Possibly, yeah, I think so.

“You get these opportunities once in a lifetime, potentially, and you’ve got to grab them with both hands and make the most of it.

“It’s important that we prepare well this week and let the occasion take care of itself. It’s about having no regrets, and that’s the message of this week.”