Ireland centre was sent off during win over Samoa last weekend 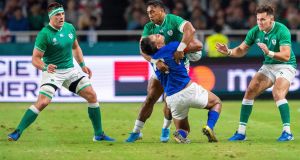 Bundee Aki will miss the rest of the World Cup after receiving a three-week ban for his red card against Samoa.

The Ireland centre was sent off in the 47-5 Pool A win over the Samoans in Fukuoka on Saturday for a high tackle on UJ Seuteni.

Aki faced a disciplinary hearing in Tokyo on Monday night, contesting the red-card decision in a bid to be available for Saturday’s quarter-final against New Zealand.

But the 29-year-old failed in that quest and was hit with a three-week ban, which would rule him out of the final should Ireland make it that far.

“The player sought to overturn the red card,” read a World Rugby statement, confirming the three-week suspension. “Having considered all the angles of the incident, together with evidence from the player and his representatives, the committee upheld the decision of the referee.”

The independent disciplinary committee of Adam Casselden, Frank Hadden and Valeriu Toma rejected Aki and Ireland’s attempts to have the red card rescinded.

In a brief statement the IRFU has said that the Irish “management are disappointed with the outcome of Bundee’s hearing and will review the Judicial Committee’s written report once received”.

Aki would have been pushing hard for a start in Saturday’s New Zealand clash, but his absence could pave the way for fit-again Robbie Henshaw to partner Garry Ringrose in midfield.

Aki has 48 hours to appeal the decision, so has the right to launch a further challenge. But precious few attempts yield a reversal of the original ruling.

Ireland flew out specialist lawyer Derek Hegarty to Japan for Aki’s disciplinary hearing, but the William Fry partner was unable to convince the panel to overturn the red card decision.

World Rugby ruled there were no “clear and obvious mitigating factors” to account for Aki’s high tackle, and imposed an initial six-week suspension that was halved on account of the Connacht star’s good disciplinary record.

Head coach Joe Schmidt had hinted Ireland would respect the outcome of the disciplinary hearing come what may when speaking straight after the weekend’s bonus-point win over Samoa.

“Once it’s a red card you sense a loss of control over what happens next, no matter what you try to present,” said Schmidt. “There is a very hard line being taken and we’ll just have to accept whatever decision is made by the judiciary.”