Ireland face the unknown in Six Nations opener with France

CJ Stander, Ireland no.8 speaks to the press ahead of earning his 19th cap for Ireland in Saturday’s Six Nations opener against France. Video: Bryan O'Brien 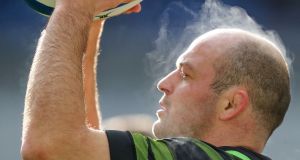 Ireland enter their Six Nations opener at what is likely to be a chilly, showery Stade de France today as the warmest of favourites against an untried and thus even more unpredictable French team than normal. It is both unprecedented and unnerving.

Ireland are almost everything that France are not, namely in good shape, with settled combinations and on a run of positive results, yet amid the known knowns, there also unknown unknowns, and if one looks throughout the history of these two countries, it is the clashes that take place hereabouts which have provided Ireland with untold grief.

Ireland have managed just two wins here since 1972, in 2000 and 2014. Both were founded on some outstanding rugby and three away tries, yet were only won by two points in each instance. In the last three visits here, there has been a draw, a two-point win and a one-point defeat.

By rights, France should have no right to win this one. They are missing key men such as Morgan Parra and Camille Lopez, they have a host of new combinations under a hastily assembled new coaching ticket and have lost their last six Tests.

There is not much discrepancy in the teams’ age profiles, with France’s average age just over 26 and Ireland over 27, but whereas Ireland average 40.4 caps per man, France average 16.1. Furthermore, with two debutants starting and another four potentially from the bench, Ireland have another 210 caps among their replacements as against 16 for France.

Yet if any team can flip form on its head it is Les Bleus. One moment of magic, one stunning try from a counter-attack or in broken play, generously sprinkled with a large helping of Gallic flair would have the Paris crowd in raptures and the events of the last six months/a year will almost be made redundant.

This is especially true if the 19-year-old debutant and wunderkind Matthieu Jalibert makes a strong start. However much his pack and scrumhalf Maxime Machenaud protects him, Jalibert’s first few touches will be significant.

Josh van der Flier, who looks tailor made for the task, and his team-mates will need to limit his time on the ball, and target Jalibert in an altogether more legitimate way than referee Jaco Peyper permitted France to do when roughing up Johnny Sexton here two years ago. Nigel Owens was part of that officiating team that day, but is the main man today, and with Wayne Barnes also on the line, it’s hard to see that being repeated.

France will again bring a strong scrum, and a big pack. One moment of magic from Maxime Medard won the corresponding game two years ago off a dominant French scrum, but Tadhg Furlong, just off the bench, was a boy at Test level then, whereas he’s world-class now, and Robbie Henshaw, who made a rare defensive misread for that try, is in a rich vein of form at outside centre. Along with Bundee Aki, CJ Stander, Cian Healy, Iain Henderson and James Ryan, Henshaw can provide the peerless Conor Murray and Johnny Sexton with enough ammunition to strangle the French, keep them on the back foot and apply scoreboard pressure. There is ball-carrying ballast aplenty in this Irish team to keep possession for long spells.

At his eve-of-match press conference after yesterday’s captain’s run in the Stade de France, Rory Best declined to comment on his attendance at the trial of Ulster and Ireland team-mates Paddy Jackson and Stuart Olding for alleged rape on Wednesday in Belfast.

Asked whether he had been given permission from the IRFU, he repeated: “No comment.” When Best was asked if he was aware of the social media storm his attendance had generated, an IRFU spokesperson intervened and said: “Sorry, we’re not going to react to comments on social media. We’re here to comment on the game. Keep it game focused.”

Specifically, Ireland are focused on the first 20 minutes. Paris gives little sense of an impending rugby match the day beforehand, and this time has been no different. All will change tomorrow as 80,000 or so clad in blue or green descend upon St Denis, but one can safely presume Ireland’s bus will not arrive late, and nor will Ireland’s focus be anything less than total.

“I think because of European rugby now, we’re able to get profiles on people, which is important,” said Best in relation to Jalibert and this remodelled team, which suggests plenty of Bordeuax games have been downloaded.

“The big thing is how they [France] play as a team. When you look at the team and you look at the caps column, there is a good team but still a lot of inexperience. It’s how that all combines. For us being first up, we can’t really predict that. All we can do is plan the best we can for what we feel they’re going to deliver and that we look to the individuals. The thing we pride ourselves on is making sure we have our detail nailed on and that we look at the opposition. We’ve done that and between now and kick-off we’ll have done that.”

Although Ireland started with a draw at home to Wales two years ago, they hit the ground running in new windows. Think Chicago and last November’s dissection of South Africa. Forewarned is forearmed, and Ireland’s record in France and the cauldron they know awaits, should also focus the mind.

Uneasy lies the mantle of favouritism, but with Murray and Sexton running the show, Ireland should justify it.