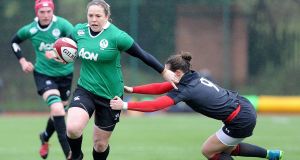 Let’s start on a positive note: Niamh Briggs is back.

Initially it looked like the evergreen Sene Naoupu would slide into the pivot, now Nora Stapleton has retired, but the veteran 10-12 combination did enough in a recent 27-19 warm-up win over Wales to be maintained in an otherwise brand new backline (besides world-class winger Ali Miller).

“Niamh slotted in there easily and steered us around the field,” said Griggs, the Kiwi being armed with genuine knowledge of the women’s game having acted as Leinster coach. “We just have to watch her match minutes at the moment, but hopefully she stays fit because she was really good for us.”

And always has been.

The loss of three Irish legends is incalculable but this day was inevitable. Only Claire Molloy survives from the 2013 Grand Slam pack.

It makes the return to fitness of Paula Fitzpatrick – the World Cup captain is benched – and Lindsay Peat crucial if Ireland are to breach the gainline.

France were spectacular last August and only to be denied a crack at eventual champions New Zealand by a stirring English performance under Belfast sheets of rain.

Tonight will prove a chastising yet important experience as Griggs and young captain Ciara Griffin embark on this new chapter for Irish women’s rugby but Sunday lunchtime visits of Italy to Donnybrook on February 11th (1pm kick-off) followed by Wales on February 25th (3pm) and Scotland on March 11th (1pm) are all winnable.

A glut of English players switched to Sevens, as always happens when the Olympic cycle begins, so the Rioch Arena on Friday, March 16th (5.30pm) should be competitive viewing.

Every game is live on RTÉ.

A long-term IRFU strategy for women’s rugby is promised. In the meantime, a tough campaign awaits but there’s enough encouraging work below the surface with plenty of former (female) internationals seeking to complete the IRFU stage three coaching course.