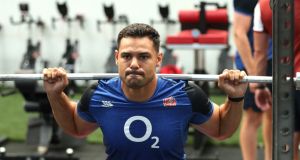 Ben Te’o is a surprise omission from the England squad preparing to face Wales on Sunday, casting doubt on his place at the World Cup. Eddie Jones has also left Mike Brown and Ben Spencer out of his 33-man squad for England’s first World Cup warm-up match, the latter’s exclusion meaning a likely debut for Willi Heinz at Twickenham.

Jones has suggested that those left out may still go to Japan, but the fact he names his final squad of 31 just 24 hours after England face Wales does not appear to bode well for Te’o nor Brown, Spencer and Alex Dombrandt, who has also been omitted.

Jones has repeatedly tweaked the World Cup training squad he announced a month ago but dropping Te’o from this week’s camp in Bagshot would be perplexing if he is to be included on Monday given that he is not attached to a Premiership club, having left Worcester this summer. He will now have to undertake his own training programme. “Players excluded from being involved in this camp are naturally disappointed but may get another opportunity so they must be ready,” Jones said.

Piers Francis and the uncapped Joe Marchant have been preferred to Te’o, along with Jonathan Joseph, who returned to form and fitness towards the end of last season. Marchant and Heinz are among five uncapped players selected and with Ben Youngs the only other scrumhalf picked, the New Zealand-born 32-year-old looks set for a Test debut. Heinz’s Gloucester teammate Danny Cipriani, who was not included in the recent Treviso training camp, has again been overlooked.

Ruaridh McConnochie, Jack Singleton and Lewis Ludlam are the others without Test experience hoping to impress while Mako Vunipola has been included but is not in contention to face Wales despite “progressing well” from hamstring surgery. Similarly, Jack Nowell is in camp to continue his rehabilitation on an injured ankle. Brad Shields, who flew home from Treviso early with a foot injury, has not been included though England are hopeful he will be fit for the World Cup.

After facing Wales home and away England also host Ireland and Italy before heading to Japan. Jones said: “We have worked hard and now move into a four-game preparation phase where the development of the team tactically is paramount. By the time we fly out on September 8th we will be ready to win the Rugby World Cup. We are not there yet but we have four games to get ready.”