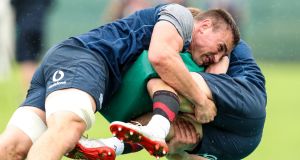 Opportunity knocks for a host of players in the extended Ireland squad this week when they line up against Italy in the first of four warm-up games at the Aviva Stadium (kick-off 2pm) this Saturday.

Given it is also the first of only three before the 31-man squad is finalised, conceivably it might be the only chance some of these players are granted as well.

The presence of Chris Farrell, Luke McGrath, Dave Kearney and Tommy O’Donnell for media duties at the squad’s Carton House base yesterday was a clear signal of the coaches’ selection thinking for this game.

For the latter two especially this would have seemed a long shot until quite recently. O’Donnell and Kearney have played in only three Tests each since the last World Cup, while the former hasn’t played for Ireland since the 2016 Six Nations. A mix-up over the dates of the 2016 summer tour to South Africa and his wedding meant he missed that tour, and having been picked for the 2017 tour to Japan and the USA he was ruled out with an ankle injury.

O’Donnell, cruelly, also missed the 2015 World Cup when suffering a badly dislocated hip in the last few minutes of the opening warm-up game at home to Wales. He was flying at the time, but the memory won’t faze him.

That said, O’Donnell admits that injury was more mentally trying than others he’s suffered over the years.

“The first few days, at the time, I didn’t know if I was ever going to play again. So to be able to get back, rehab and to be back on the field within 16 weeks, there were a lot more positives to play off there rather than thinking ‘Oh I missed out on a World Cup’. It’s four years later and I’m still playing rugby. If you were to give me those two situations, I would much happier be in this situation here.”

O’Donnell was restricted to just eight starts for Munster last season. After undergoing shoulder surgery in January, he returned to fitness but couldn’t force his way into the match-day squad in the Guinness Pro14 semi-final against Leinster, meaning he last played on January 19th. But injuries to fellow opensides Sean O’Brien and Dan Leavy contributed to this opportunity.

“I was hopeful to get the call off Joe and eventually it did come my way. Once you get into this environment and pre-season happens, you’re just trying to show up at every training session and put as good a marker down as you can do. As soon as I got the phone call, that was my attitude heading into the camp.”

Asked if making this World Cup squad would be a personal career highlight, O’Donnell said: ‘It would but then there would be so much more. It’s not just about making the squad and getting on the plane because of the quality of this squad and the quality of the players and there’s players in here with massive ambitions so there’s a lot more to achieve so if I manage to achieve and get on the plane that it wouldn’t stop there. There would much more to achieve.”

1 Timo Werner giving up on Liverpool dream on path to being truly wanted
2 Ian O’Riordan: An education in race and running during college days in America
3 Tianna Bartoletta: ‘After you’ve gotten your medal, you become black in America again’
4 Mature Ringrose keeping the ups and downs of rugby life in perspective
5 Connell losing touch with club championship is real tragedy of Normal People
Real news has value SUBSCRIBE