England miss out on All Blacks win after controversial call 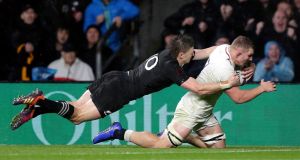 Beauden Barrett of New Zealand tackles Sam Underhill of England as he scores a try that was later disallowed during the autumn international at Twickenham. Photograph: Henry Browne/Getty Images

England fell agonisingly short of toppling New Zealand after a late try by Sam Underhill was controversially ruled out in a 16-15 defeat at Twickenham.

Courtney Lawes charged down TJ Perenara’s 76th-minute box kick and the ball fell to Underhill, who weaved fullback Damian McKenzie inside out to touch down in the left corner.

After reviewing the try with the TMO, however, referee Jerome Garces judged that Lawes had been in an offside position and awarded the All Blacks a penalty.

It was a marginal call and England responded with a late onslaught that failed to produce the crucial winning score, but it was a fine performance from Eddie Jones’s men that will serve them well heading into next year’s World Cup.

They led from the second minute until the 60th as early tries by Chris Ashton and Dylan Hartley helped them to a scarcely-believable 15-0 lead that was gradually eroded.

Beauden Barrett nudged the All Blacks in front with a penalty as England’s play grew progressively worse having set off like a steam train, their forwards bristling with aggression.

The momentum shift began late in the first half and was confirmed by a terrific try from McKenzie.

All Blacks coach Steve Hansen had raised expectations by declaring the match to be bigger than last year’s series against the British and Irish Lions, but an arm wrestle of a contest failed to provide quite the same drama.

England were depleted by injury but buoyed by a rousing 12-11 victory over South Africa a week earlier and they traded on equal terms with the world champions from start to finish.

Jones called on his players to act as movie directors rather than extras in the 41st instalment of the fixture and they did exactly that in the first half.

Strong carries from Underhill, Kyle Sinckler and Maro Itoje in a rampaging start sucked in defenders and when Ben Youngs spotted an unmarked Ashton stationed on the touchline, he sent the Sale wing sliding over with a floated pass.

McKenzie was shoved into touch by Underhill and then Jonny May as the All Blacks came under renewed pressure and England extended their lead with a drop goal by Owen Farrell.

Elliot Daly and then May running at speed into heavy traffic produced a roar from Twickenham, but it was in response to Hartley’s 24th-minute try that the crowd really erupted.

A lineout 15 metres out developed into an unstoppable maul that arrowed diagonally towards the posts and with backs adding their weight, a pile of white shirts crashed over the line with Hartley scoring.

New Zealand-born Brad Shields disappeared to the blood bin – an England player could be heard complaining on the ref mic that the flanker had been punched – and in a blow to the tourists Sonny Bill Williams followed him off the pitch with a groin problem.

The All Blacks strung together 23 phases and through Rieko Ioane they finally threatened the try line, the breakthrough arriving soon after when McKenzie ran a brilliant line to take an inside scoring pass from Barrett.

A Barrett penalty slashed the deficit to five points at half-time and when the teams emerged for the second-half Hartley had been replaced by Jamie George.

Ardie Savea dropped a poor pass by Aaron Smith with the line beckoning but a Barrett drop goal – the first of his 71-cap career – continued to drain England’s lead.

Youngs almost dummied his way over from an attacking scrum as play swung to the opposite and New Zealand took the lead for the first time in the 60th minute through a Barrett penalty.

An ascendant scrum offered England a platform but they failed to make the most of it and with the clock ticking down Underhill’s heart was broken by the intervention of the officials after he had outfoxed McKenzie.