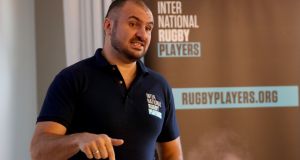 “To suggest that players can play five incredibly high level Test matches in consecutive weeks in November is out of touch.” Johnny Sexton’s input was followed by Kieran Read: “Fans don’t want to see fatigued players playing a reduced quality of rugby as part of a money-driven, weakened competition that doesn’t work for the players or clubs.”

Such a show of unity against the world governing body could have been avoided, and while 2019 will eventually be remembered for the ninth World Cup, a disastrous breakdown in communication between players and administrators is forever recorded.

It means, post-Japan, an outdated status quo remains intact for the next run of broadcast deals, slowing rugby’s ideal aim of evolving into a global game.

“World Rugby are failing to respect the players’ views and genuinely engage on the issues,” Hassanein stated six months ago.

The battle ended in stalemate. A rejigged two tier Nations Championship crumbled despite World Rugby promising revenues of £5 billion over 12 years. Try building a new house without labour. That’s before the Georgian president Gocha Svanidze, among others, branded the WR executive as a crowd of “snub-nosed retrograde officials”. The IRFU also resisted any great leap that includes relegation from the Six Nations.

Above all else a glaring disconnect was revealed between players and those who run the game.

“It’s difficult for us to understand why the administrators of our sport wouldn’t want that unique coalface understanding of potential decisions that only players can offer,” Hassanein explained this week. “We can’t understand why a fear might exist in doing that.”

Everyone agrees on the need to revitalise the international schedule but the plan being savaged by the World Player of the Year and All Black captain leaves a sport lacking clear direction as it enters year 25 of its existence as a professional entity.

“We are trying to shift a culture that had existed since the amateur era,” said Hassanein. “As the most central stakeholder in the game we need to have a genuine seat at that table. I think World Rugby and the other stakeholders now respect that.

“They had to see that player support is needed behind any concept they are trying to drive. Unfortunately, that thought process was driven by the fact that they had to see the opposite first.

“We are working now with World Rugby to achieve a more constructive relationship, in a more meaningful sense, behind closed doors, but because we are in an era of social media – when players have a grievance about something they are going to come out publicly.

“We see it as a positive if players and administrators are engaging at a level whereby they view each other as peers. That’s the direction our senior players are pushing us.”

After rejecting WR’s vision for the future, what do these senior players – also guided by former New Zealand centre turned lawyer Conrad Smith – want their international game to become?

“Players were never opposed to the concept of a world league,” Hassanein stressed. “They were actually in favour of it. They realise the game can’t survive forever on the status quo. It was the details within the concept that didn’t sit well with the players.

“There is no silver bullet solution. We have some key principals that need to be upheld. Player welfare must be at the forefront – matches, training and travel. Another key principle is any solution must be a positive for tier two nations. The clubs were never involved in discussions for the Nations Championship so the biggest losers, by not having alignment, are the players. Another key principle is that Regulation 9 – player release and ability to move from club to country in certain windows – must be a focal point.”

The scramble by World Rugby to salvage the Nations Championship concept ended in June with unions unable to agree upon promotion and relegation.

“We feel the Nations Championship was a missed opportunity for the sport,” said Hassanein. “We tried to find solutions from what we were presented. If I put myself in the shoes of administrators I can’t see how you wouldn’t want player input in every room because it is a far different viewpoint to what any administrator is going to bring – all the things you have to actually live to understand.”

1 Munster braced for worst of financial crisis due to Thomond Park debt
2 Record numbers of adults in Ireland participating in sport and walking
3 Seán Moran: Horan’s cautious approach under growing pressure
4 When the action stops, sports photographers think outside the box
5 From history to food: Players take chance to focus on life after rugby
Real news has value SUBSCRIBE

Premier League clubs vote to resume contact training 13:02
People who attended illegal match in France are asked to get tested 12:09
Record numbers of adults in Ireland participating in sport and walking 11:45
Lisa Fallon appointed manager at London City Lionesses 11:17
Munster look to bear brunt of financial crisis; Bayern offer a slice of normality 07:02
Here is your handy guide to sport on television this week