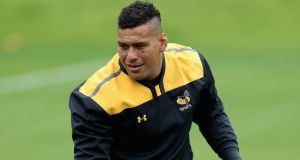 Nathan Hughes’ mysteriously aborted disciplinary hearing took a fresh twist when it emerged that the England number eight tweeted “What a joke” upon learning the verdict.

A three-man panel convened in Coventry on Wednesday night to investigate his citing for punching while on club duty for Wasps only to postpone issuing a judgement in highly peculiar circumstances.

It now appears that the tweet, which has been deleted, could be the reason for the delay pending a second hearing to be held within seven days.

Hughes’ case opened at 7pm and it was at 8.37pm that the Fijian-born number eight took to social media to voice his frustration at the outcome, which has not been made public.

If he is to be reprimanded for his comment on Twitter, he is likely to face additional sanction on the grounds of conduct.

A Rugby Football Union statement said only that a delay was necessary “in order to deal with an issue that arose during the evening”. When asked for clarification on the issue in question, the RFU declined to comment

Hughes is unable to play until a verdict is reached, almost certainly ruling him of Friday’s Champions Cup clash with Leinster as it is unlikely the panel can reconvene before the trip to Dublin.

“The independent panel appointed to deal with this case will reconvene within seven days in order to deal with an issue that arose during the evening,” panel chair Gareth Graham said.

“No judgment will be issued by the panel in this period and the panel direct that the player, Wasps Rugby and the RFU are to make no further comment until the case has concluded.

“The player remains suspended until the conclusion of the matter.”

Hughes was cited for punching Lewis Ludlow in the head while being pinned to the floor by the Gloucester flanker in the final minute of Wasps’ 35-21 defeat at the Ricoh Arena on Saturday.

The incident could have seen the Fijian-born 27-year-old banned for six weeks if found guilty as blows to the head are automatically considered to be a mid-range offence in the table of sanctions.

A suspension of that length would rule him out of the November Tests against South Africa, New Zealand and Japan, but make him available for the climax of the series against Australia.

His absence would leave England reliant on Billy Vunipola as their only recognised number eight after Exeter’s Sam Simmonds was ruled out for at least six months by a knee injury.