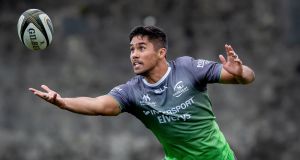 For less time than people might have believed, it was impossible to conceive how Connacht were going to fully function without John Muldoon front and centre. A figure of mythical status as player and leader, Muldoon called time at the end of the 2017 season. With him left not just the physical body but a decade of defining what Connacht had become.

Originally from Portumna, Muldoon was carved from Connacht limestone. Transported to Galway, he became the fixed embodiment of the club from the time Michael Bradley installed him as captain before the 2008-09 season. Then, just over a year ago, the easy smile and murderous intent of Jarrad Butler flew in from Australia. Connacht knew, if nobody else, what they were getting.

Coach Kieran Keane, who spent one season in Galway, called Butler “a bit of a firecracker”. It was the backrow’s first season and Keane, who at that stage hadn’t coached him and didn’t entirely know if he was a seven or an eight or a six, meant it as a compliment.

New Zealand-born former Brumbie Butler was largely a stranger to former Brumbies coach Andy Friend, when he subsequently took over as coach prior to this season. Since then Friend has been marinating his captain with all sorts of kind words.

Friend, installed in May, had the conversation with Butler after Connacht’s pre-season friendly against Brive in August.

“He said we’re going to do this,” said Butler of the captaincy. “There are so many leaders in this group, I could pull out five or six names that could do the job as well,” he thoughtfully added. But in deferring any perceived kudos towards the team, he was already learning the captain’s job.

Last week Butler hit high in the tackle chart, putting in more than any other player in the Pro14, with 25 against Ulster in Kingspan Stadium. In another step forward, he led Connacht in reclaiming a piece of unwanted history after 60 years of losing misery in Belfast.

An intelligent and instinctive player, he may still feel he has more to do to comfortably bed in as captain

“I’ve been learning on the fly a little bit,” he said a few weeks ago, adding that his best quality as captain is “leading by example”.

Already Butler has won his way into a position he could never have scored for himself. He is a career player but his fate was sealed in July 2017, when the Brumbies, the only Australian team left in the Super Rugby finals, were eliminated by the Wellington Hurricanes. Although he had signed with Connacht, a group of players left Canberra after that defeat. Two of them would make instant impressions in Ireland: lock Scott Fardy at Leinster, and Butler.

An intelligent and instinctive player, he may still feel he has more to do to comfortably bed in as captain. People still talk about Muldoon, and Butler has said he texts him over in Bristol where he is coaching. That’s just being intelligent.

This weekend Bordeaux Bègles is a more exacting test because of the nature of the Challenge Cup. Connacht will expect to go better than last season’s quarterfinal and push towards a reprise of the 2009-10 semi-final where they lost to Toulon 12-19.

The French team, who made a key signing for the season in Fijian wing/centre Semi Radradra, have made the Challenge Cup knock-out stages with a quarter-final in 1997. Their position in the Top 14 seems safe if not overly impressive at just below mid-section, a point behind Racing, two points below Toulouse.

The 27-year-old Butler has pedigree and, although he never managed a senior Australian cap, he is a former Australia U20 international. He joined Connacht on a three-year deal before the change extending rugby’s residency rule to five years. Another backrow in a hugely competitive space, yes. But he could qualify to play for Ireland in 2020.

But quids in, Galway will rattle and shake and Bordeaux will feel it and not in a way they like.

He has been on the pitch for the entirety of the five games he has played with Connacht in the league – except for 10 minutes against Edinburgh when he was sin-binned. Last season Butler played in 16 matches and for 12 of those he was competing for 70 minutes or more, earning yellow cards against Worcester and Gloucester.

“He was just about everybody’s choice after a year,” said a Connacht official. No, he hasn’t become the new Muldoon.

But with Friend and the stream of players Connacht have been drawing from their hinterland (it was Mayo native Dave Heffernan who took the armband against Leinster when Butler was ruled out with injury), they have a different package.

Beating Ulster was a beginning of sorts. Bordeaux might confirm the direction they are going.