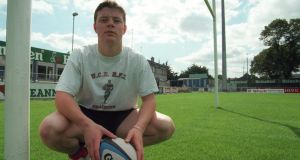 Brian O’Driscoll in UCD in 1998. He shifted between outhalf and centre when playing for the college.Photograph: Andrew Paton/Inpho

In 1996 Lee Smith walked onto the UCD campus while out for a stroll, a gentle orientation process in a new environment, and on a whim, enquired whether the college had a rugby team. A New Zealander, he’d just arrived in Dublin to take up an appointment as Director of Development with the International Board (IRB).

Boasting an impressive pedigree, eight years as director of coaching with the New Zealand Rugby Union and a man who had set up many of their structures that exist today – he’s worked with the All Blacks, Hurricanes in Super 15, Fiji, Tonga and Samoa during his time as Oceania Development manager (2001-2010) as well as numerous NPC teams in New Zealand – his arrival heralded a serendipitous moment, not just for UCD rugby.

Returning that night, Smith walked in on a training session. “It was about three weeks prior to the start of the season and there were about eight players at practice. Paul Barr was coach and I was his co-coach for that first year before taking over,” he recalled.

At that time in another part of Dublin, John McClean, was preparing for his final season (1996-1997) as coach to the Leinster Schools team. He would make a decision whose ripple effect permeates today’s Six Nations Championship match between France and Ireland in Paris, some 18 years on.

McClean approached the player who expected to play outhalf for the Leinster Schools with a suggestion that he might switch to the centre. Brian O’Driscoll wasn’t too enamoured at the prospect. “I did have to convince him and promise him that if it didn’t work out he could switch back. He’d played scrumhalf at JCT level in Blackrock and then switched largely to outhalf for the senior cycle.

Great hands
“There was part of me that felt he didn’t have the kicking game to play 10 but for the most part it concerned the positives in finding a position to maximise his great hands, low centre of gravity and pace. We also had Andy Dunne, then a fifth year in Belvedere, to play outhalf.”

Dunne was a brilliant schools player but unfortunate that injuries proved a bane of his professional career. Leinster won the Schools interprovincial series.

Meanwhile Smith had ambitious plans for UCD rugby. “What I did was we set up an academy. We used the annual dinner in the O’Reilly Hall in UCD to raise funds. As a result we were able to employ John McClean [as director of rugby in the college] and turn the whole show around.”

In 1997 they introduced scholarships for rugby and among that first year’s intake, was O’Driscoll. The following year he won an Under-19 World Championship winners medal on the Declan Kidney-coached Ireland team.

O’Driscoll shifted between outhalf and centre for UCD. He made his debut for the first team when coming on as a replacement in an All-Ireland League match against UL Bohemians in Annacotty.

Stockily built
Smith smiled as he recalled his first encounter with O’Driscoll. “I didn’t know who he was and I asked him if he was one of the young props because he was so stockily built. I soon found out he wasn’t.” O’Driscoll’s response to the unintended ‘slight’? “He just gave me that grin.”

Two matches convinced Smith the young player’s future lay in the centre. The New Zealander elaborated: “We were playing in a European Universities tournament [semi-final] against Brunel in England. He scored all our points but we lost the game because the ball didn’t get much beyond him. He was very young.”

The second was an AIL game against Instonians in Shane Park. O’Driscoll scored 22 points but largely refused to kick the ball. He ran when he shouldn’t have, was turned over and the Ulster club prevailed with a late drop goal.

Smith explained: “I thought something has to be done. We had a good Kiwi second five -eight, inside centre, Michael Colling. I told Brian that he would be wearing 13 on his back and that was where he was going to stay.

“Michael, of course only gave him good ball; really you just had to give O’Driscoll his head. If he chipped ahead it would invariably land in his hands. He is the best player . . . I was director of coaching for the New Zealand Rugby Union and I had a lot of players through my hands there including Jonah [Lomu]; in terms of a complete rugby player, he [O’Driscoll] just had a natural gift for the game at centre. Yeah, he was the man.

“He had a quiet confidence in his own ability to execute while at the same time he was willing to listen and learn. Initially he would go all the way on his own and the wings and fullback would get very frustrated. He developed a game where he learned to offload, run the outside man in. He became a more percentage player without taking away the opportunism or his natural instinct.

“He seldom threw the ball away in the tackle, he didn’t force the issue if the opportunity wasn’t on, he realised that retaining possession was more important than a 50/50 pass. The other thing was that when he bulked up physique-wise his tackling became quite devastating. He tackled low and hard and given his height had the ability to recover the ball in the tackle as well.

That grin
“After last weekend’s match as he made his way off the pitch, I saw that grin; you’d think he was still an 18-year-old. He looked so young, just a kid enjoying himself.”

Smith, who returned to New Zealand in 2001, said he was “very emotional” watching Ireland’s win over Italy and expects similar feelings for O’Driscoll’s Test swansong in Paris. “I could record it but I’ll get up to watch it live [6.0am in New Zealand]. I wouldn’t miss what will be a special occasion. I just hope he gets the right result. It would be a great way to end a brilliant career.”

McClean too will pull up a chair this evening. “I’ve gone from coaching to watching a fantastic player and a wonderful guy. Sometimes sporting icons don’t live up to that billing off the pitch but he’s handled himself superbly, through good times and bad, and is definitely a role model for young people.

“Lee and I would agree that given the raw material, Brian required little more than a gentle nudge in coaching terms.”

On March 27th, 1999 O’Driscoll scored 26 points for UCD in a league match against Monkstown at Sydney Parade. Watching was Ireland backs’ coach Philip Danaher. A few months later he’d graduated from the UCD team to Test rugby, making his debut against Australia in Brisbane that June.

Today in Paris he’ll don the green jersey for a final time, leaving behind some glorious memories. “Ad Astra” is UCD’s motto – O’Driscoll has it emblazoned on his boots – something he has taken to heart, his career sprinkled with the stardust from that journey.

FA Cup round-up: Southampton and Spurs to do it all again 17:34
Communication is key for new FAI president Gerry McAnaney 16:59
Rowing: Ireland’s Olympics hopefuls shine at Indoor Championships 16:31
Paisley Park extends unbeaten record in fine style at Cheltenham 16:18
Kellie Harrington has to settle for silver medal in Bulgaria 15:15
Here is your handy guide to sport on television this week