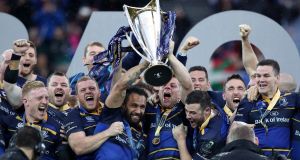 From August 1st Eir Sport customers will no longer receive Champions Cup or Champions League free of charge on BT Sport with Sky now the official distributors in Ireland of both BT and Premier Sport.

On Monday Sky announced details of their new Sports Extra package which will allow customers to view all 233 televised Premier League games, every Champions League and Europa League match as well as every Heineken Champions Cup match, Pro14 and more under one subscription.

The new package includes BT Sport 1, 2 and 3 as well as ESPN and Premier Sport 1 and 2 – the channels that were previously offered as part of Eir broadband and TV packages.

While pricing of the new package is yet to be announced, Sky have said that customers can sign up to Sports Extra on its own if they wish, meaning that Eir customers who previously received the channels for free will now have to pay a subscription if they want to keep them. Sky have also said customers can’t choose separately between BT Sport and Premier Sport.

Eir will now broadcast only what they show on their own channels which includes 48 games at this year’s Rugby World Cup, all 152 games from the Pro14 and Allianz League football and hurling.

In the UK Amazon Prime recently signed a deal to broadcast 20 Premier League games during the upcoming season but those games will also be available under Sky’s Sports Extra package in Ireland as they will be shown on Premier Sport.

Under the new package customers will also receive Premiership rugby, a number of GAA fixtures, racing and all PGA Tour and European Tour golf, including all four Majors and all five women’s Majors.

Virgin Media customers will be unaffected by the change as the broadcaster will still show every Champions League match (including one free-to-air on Tuesday nights) with RTÉ also showing one while on Wednesdays the Champions League action will be exclusively broadcast in Virgin Media Sport.

The broadcaster also shows nine Champiosn Cup matches live on their free-to-air channel (Virgin Media One) every season including one quarter-final, one semi-final and the final.

While Virgin Media Sport is free for Virgin TV customers, Virgin mobile or broadband customers can pay €10 a month and non-Virgin customers €20 a month.

Virgin Media Sport also shows every Europa League match and Euro 2020 qualifiers. If Virgin customers want to sign up for Sky’s Sports Extra they will, like Eir customers, have to pay a separate subscription fee to Sky.