Cipriani still out in the cold despite Owen Farrell injury 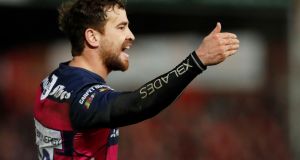 Jonathan Joseph has been added to England’s Six Nations squad despite making just one appearance in the past nine months with Eddie Jones opting against adding any outhalf cover for the injured Owen Farrell, dashing Danny Cipriani’s hopes of a recall.

Joseph’s addition is the only change to the squad to travel to Portugal on Wednesday, with Farrell, as well as Joe Launchbury and Brad Shields, who emerged as minor fitness concerns on Sunday, confirmed among the 36-man group.

Farrell was always expected to head to Portugal and England are confident their captain will be fit to face Ireland on February 2nd but, after undergoing thumb surgery last Saturday, it remains to be seen if he can take a full part in training in Portugal, the first session of which is on Friday.

That raised the possibility of England calling on an extra outhalf with Cipriani among the potential options but Jones has handed the extra place in his squad - he can select a maximum of 36 - to Joseph.

The Bath centre managed 51 minutes on his comeback appearance against Toulouse on Sunday but Jones has been happy to call on players with limited game-time in the past - Ben Te’o started three of England’s four autumn internationals after playing only 28 minutes for Worcester in the two months prior.

Joseph’s lay-off has been considerable however, having suffered a broken foot as well ligament damage last April. Bath had pencilled him in to return towards the end of last year but his comeback was delayed by a subsequent achilles problem.

It is understood Joseph’s call-up is not due to fitness concerns over any other centres in the squad, rather that he is considered to have proved his fitness over the weekend and is in contention to face Ireland. His last cap came at the end of last year’s Six Nations and he is England’s joint top try-scorer under Jones but Henry Slade has established himself as the first-choice outside-centre in Joseph’s absence.

He also has competition from Manu Tuilagi, after Jones last week conceded the Leicester centre is best suited to the number 13 jersey, as well as Te’o.