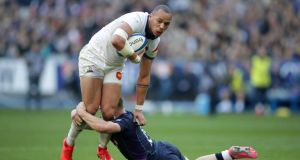 A tackle on France’s Gael Fickou in Stade De France, Paris. “He has beaten lads on the outside, and, having played on the wing, he has proved he is fast enough.” Photograph: Adam Davy/PA Wire

For many, many moons Ireland’s success revolved around the driving force, the defensive linchpin, of a man who wore number 13. Not much has changed.

Two 24-year-olds, Gaël Fickou and Garry Ringrose, both to the manor born, are tasked with exposing and denying each other in equal measure. Finally they meet in organised combat, having glanced shoulders in the last version of this biannual Dublin gathering when France were still wasting their athletic “freak”. In 2017, the Gaël force proved easier to contain at inside centre.

Only 306 days separates their arrivals on earth, but a gulf in Test matches is already apparent. Ringrose, despite his prodigious younger days, runs in green for just a 19th time, while Fickou has 44 caps, albeit 19 as a sub, as a host of harebrained coaching decisions sprayed him all over the backline.

“Gaël was always a huge prospect,” says Mike Prendergast, his coach at Stade Francais. “He struggled when Toulouse struggled, but came to Stade this season, and has been our standout player.

“We run the attack around him, and you need to just get him on the ball as much as possible, because he creates things.”

There are obvious differences between Ringrose, born and raised in Blackrock, Dublin, and Fickou, from the beach town of La Seyne-sur-Mer on the sparkling Côte d’Azur but fast tracked through the Toulouse ranks and capped by France as a teenager in 2013, yet their talent is strikingly similar.

The major difference in increasingly parallel careers is their physiques but that is slowly levelling out as well. Fickou is two inches taller than 6ft 1in Ringrose and over a stone heavier. Ringrose cut a skinny figure as Fickou powered into Test rugby.

“On attack he is a big man and has a serious turn of pace,” Ringrose began his appraisal, following little else but rehab and research due to damage sustained in defeat to England, a hamstring that reduced his Six Nations to 72 minutes so far.

“He has beaten lads on the outside, and, having played on the wing, he has proved he is fast enough, but then, equally, he is really good at stepping in and taking your inside shoulder.

“He might fake the outside and step back in, which is always a challenge at 13 to defend that, especially someone of his size and his pace and his hand off. It’s a massive challenge for me.”

Ringrose has always known about Fickou. “I think he was a year ahead of me and went straight to seniors, so I never played against him. But he is pretty freakish, someone that size who can be a battering ram when he wants, just bust tackles. But he has the gas to take guys on the outside as well. It’s pretty scary.”

Typically polite, he doesn’t seem frightened at all.