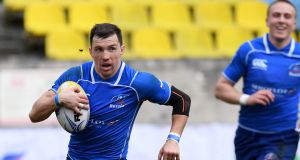 Former Blackrock College wing Vasily Artemyev will captain Russia at the upcoming World Cup after they confirmed their 31-man squad on Monday.

Experienced flyhalf Yuri Kushnarev, Denis Simplikevich, Evgeny Matveev, Andrei Ostrikov, Vladimir Ostroushko, Victor Gresev and Andrei Garbuzov are the survivors from the squad who featured at the country’s only other appearance at the finals in New Zealand in 2011, where they failed to win a game.

Only two players in Lyn Jones’s squad play outside Russia – prop Valery Morozov who is with Sale Sharks in the English Premiership and secondrower Ostrikov of Grenoble in France.

Welshman Jones, who was appointed in August last year, has also picked 32-year-old tighthead Kirill Gotovtsev, who made his Test debut in 2015 against Portugal.

Gotovtsev, who has played four times for his country, has also represented Russia in wrestling and the two-man bobsleigh.

Russia will play in Pool A alongside Ireland, Scotland, Samoa and Japan, and kick off their campaign against the hosts in the opening game of the tournament in Tokyo on September 20th.

They qualified for the 2019 World Cup after Romania, Spain and Belgium were docked points for fielding ineligible players in qualifying tournaments.

Russia were thumped 85-15 by Italy in their final World Cup warm-up match.

Champions League draw: Manchester United handed tough draw on return 17:27
Leo Cullen: ‘It feels like it all came crashing down on top of us’ 15:41
Genoa’s Serie A match postponed over Covid-19 outbreak 15:25
Everton striker Dominic Calvert-Lewin among new names in England squad 14:36
2017 winner Ostapenko returning to form in French Open 14:15
Crossword Get access to over 6,000 interactive crosswords