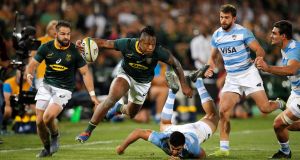 South Africa winger S’busiso Nkosi leaps with the ball before scoring a try during the Test match against Argentina at the Loftus Versfeld Stadium in Pretoria. Photograph: Marco Longari/AFP/Getty Images

Flanker Kolisi, the Springboks’ first black Test captain and a key figure for the side on and off the pitch, missed the entire international season with a knee injury but was able to prove his fitness with a solid display against the physical South Americans.

“Siya was wonderful,” the former Munster coach told reporters. “We wanted to get him off after 30 minutes but he said was feeling great. At half-time I asked him if he wanted to go more, and he said he wanted 70 minutes!”

Erasmus confirmed Kolisi was feeling no ill-effects from the bruising contest and that now the challenge was to bring him up to full match fitness after just two starts in provincial and international rugby since May.

“Medically he is fine and that’s great. Next is to condition him physically with match fitness and we will give him more game-time in the Japan match to get him ready.

“We are fast-tracking Siya because we know what we have in him and he is our captain.”

Kolisi will get a final run-out ahead of the Springboks’ World Cup opener against New Zealand in Yokohama on September 21st with a meeting against hosts Japan two weeks prior to that.

Erasmus rested 18 players for the contest in Pretoria, with a completely new starting XV from the side that beat Argentina 46-13 in Salta the week before to lift the Rugby Championship.

Wing S’busiso Nkosi scored two excellent solo tries while outhalf Elton Jantjies kicked 14 points as the home side battled to open up the visitors’ defence in a scrappy clash that included numerous errors from both sides.

Argentina scored tries through lock Guido Petti and skipper Pablo Matera and might have had more were it not for poor handling at vital moments as they slipped to a ninth successive test defeat.

Erasmus said he knew that would make it harder to win but said it was necessary to cast his eye over a few players who still needed to prove that they should be on the plane to Japan.

“I won’t name names but there were one or two we had to get confirmation on and I had some doubts,” he said.

“We will now take 37 guys to Bloemfontein tomorrow [Sunday] and will be there until Wednesday. Then the guys will go home until Sunday, before we return to Jo’burg for the squad announcement on Aug. 26.

“I can say we got confirmation of some things tonight. To rest 18 players – I know people don’t like manoeuvring around Bok teams and if we had lost, you guys [the media] would have got into me, but then again you learn so much.”