Springboks take the title after denying England any space to breathe 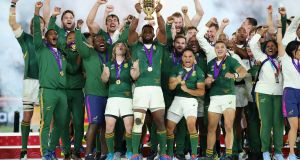 Caused England plenty of problems with his mazy running. A consistent threat. Rating: 7

One of South Africa’s most consistent players in the competition, he was again impressive. Rating: 7

Applied a quality finish for his side’s first try that put England in reverse gear. Rating: 7

A precision display by the fly-half, kicking eight out of nine shots at goal for a 22-point haul. Rating: 8

His usual box of tricks. Mixed and matched his running and kicking game impressively. Rating: 7

Caused maximum destruction to England’s scrum during his 45 minutes on the pitch. Rating: 9

Suffered an early injury, being forced off after just 22 minutes. Rating: 5

A strong performance as part of a dominant Springboks pack. Rating: 7

A tireless work-rate from the experienced lock, who was a colossus in defence. Rating: 8

Forced off early due to injury, making way for Franco Mostert midway through the first half. Rating: 6

The Springboks’ first black captain led an inspired performance on an unforgettable day for his team. Rating: 8

Another outstanding display from a world-class player, who excelled in every area. Rating: 8

Made his impact on the contest by running strongly and tackling hard. Rating: 7

South Africa’s replacements all made an impact as England were left floundering. Rating: 7