Dylan Hartley on the bench as England take on Australia 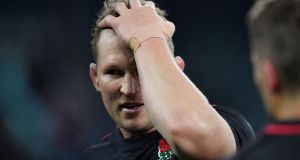 Dylan Hartley has been named on the bench for England’s clash with the Wallabies. Photograph: Toby Melville/Reuters

Dylan Hartley has been left out of Eddie Jones’s starting XV to face Australia while Manu Tuilagi is in line a first England appearance for more than two and a half years after also being named on the bench.

Hartley was also among the replacements against Japan last Saturday but, with Jones selecting his first-choice side to face the Wallabies, his omission from the starting lineup is significant. He is listed as co-captain, along with Owen Farrell, but Jamie George has been named to make his seventh England start.

Against Samoa last year Hartley was also on the bench but, much like against Japan, that was an experimental team selection by Jones. He was also absent against France during this year’s Six Nations because of a calf injury, as well as the three summer Tests against South Africa as a result of concussion, but last week Jones hinted that he may be used more as a replacement.

Tuilagi meanwhile, is set for his first cap since the 2016 Six Nations and only his second under Jones after coming through Wednesday’s make-or-break training session. He was rated by Jones as very doubtful on Monday but has since been deemed fit enough to be included. Joe Cokanasiga keeps his place on the wing after an impressive debut against Japan, helped by the withdrawal of Jack Nowell with a hamstring injury. Jonny May returns on the other wing after being rested for the 35-15 win over the Brave Blossoms.

Ben Te’o and Henry Slade return at centre, while Ben Youngs is back at scrum-half and both props are changed, with Ben Moon and Kyle Sinckler starting. In the second row Jones has selected Maro Itoje alongside Courtney Lawes for the first time in his tenure while Brad Shields and Sam Underhill both return to form the same back row that started against New Zealand, alongside Mark Wilson.

The number eight Nathan Hughes is among the replacements, having returned from suspension, taking his place along with the Exeter props Alec Hepburn and Harry Williams, the second-row Charlie Ewels, Richard Wigglesworth and George Ford.

“We’ve picked our best 23 for the Australia game,” said Jones. “We know they have a unique style of attack so our ability to defend that is going to be important. We are continually working on our strengths, which is our set piece and our defence, and they are areas that are progressing nicely. I’m really happy with the direction we’re going in terms of the way we play the game. We are developing a unique style of rugby, which is English and the players are proud to play that way.”