Johnny Sexton: ‘It’s incredible, I’ve had to pinch myself’ 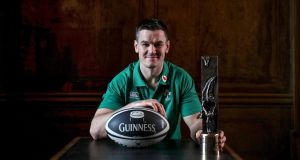 Johnny Sexton was last night honoured as the Guinness Rugby Writers’ Ireland Player of the Year for 2017/18 after a season in which he was the orchestrator-in-chief of a stellar campaign for both province and country.

This featured Ireland’s second Grand Slam in almost half a century, a series win in Australia for the first time since 1979 and Leinster’s double of European Champions Cup and Guinness PRO14.

It’s the second time Sexton has been voted as the Player of the Year by the Rugby Writers of Ireland, having also won the award in 2012-13. Reflecting on the 2017-18 season, Sexton admitted it could hardly have proved more rewarding.

“If you got offered a Grand Slam at the start of the year and nothing else you’d have snapped someone’s hand off for it, it’s such a big thing and it’s been in Ireland so few times.

But then when that happens, you reset your goals back in Leinster and you want to go back and achieve there and that rolled into the double. And then going to Australia and doing the job.

“It’s been incredible, I’ve had to pinch myself a little bit. But at the same time there’s been a hell of a lot hard work that goes into it, so it doesn’t happen by accident from a collective point of view and it’s been a brilliant year, so far.”

Fittingly, Sexton received the award at the Guinness Rugby Writers of Ireland annual banquet in the Aviva Stadium, scene of many of his triumphs in the past 18 months.

In all, Sexton was part of four Leinster wins at the ground last season as well as six Irish wins out of six, three in the Guinness Series and three in the Six Nations. To this can now be added the wins over Argentina and, for the first time ever on home soil, the All Blacks, in the last two weeks.

“Yeah, that’s history. That’s the first time. It’s always special to win the first time, do something for the first time, so to beat them in Ireland for the first time is very very special as well. Grand Slams had been done before so you could argue that that’s probably the highlight. It’s very hard but look, when you consider the whole year . . . if someone had told we’d win all this at the start of the year I would have laughed at them.”

The Dave Guiney Team of the Year Award was presented to the Ireland team which will finish 2018 on an all-time year-end high of number two in the world rankings after winning ten from 11 matches, with Saturday’s game against the USA to come.

Dr Claire Molloy picked up the Women’s Player of the Year for a second year in a row. The Wasps-based Irish captain led the women’s team to wins over Italy and Wales in the Six Nations earlier this year.

Leinster Rugby were named as Club of the Year after claiming an historic double of European Champions Cup and the Guinness Pro14 success while Lansdowne’s phenomenal season was recognized with the Tom Rooney Award, which is awarded to a person or club who have made a significant contribution to rugby.

McLoughlin famously carried half the English pack over the line at Twickenham in 1982 en route to Ireland’s first triple crown since 1949. The Shannon tight-head played on the 1983 British & Irish Lions tour of New Zealand.