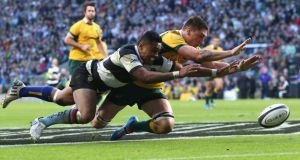 Francis Saili of the Barbarians beats Sean McMahon to the ball to score a try at Twickenham. Photograph: David Rogers/Getty Images

Australia withstood a frantic late rally to mark Michael Cheika’s first game as coach with a hugely entertaining 40-36 victory against the Barbarians at Twickenham on Saturday.

Cheika, who replaced Ewen McKenzie in October and faces Wales, France, Ireland and England this month as he builds for next year’s World Cup, started star playmakers Quade Cooper and Will Genia together for the first time since November 2013.

In an even opening half, the Barbarians’ flair and enterprise was rewarded with tries from Frank Halai and Adam Thompson which were cancelled out by close-range efforts from Sam Carter and Benn Robinson - both created by Genia.

Man-of-the-match Tevita Kuridrani scored a brilliant solo try to hand Australia a nine-point advantage early in the second half but the Barbarians’ response was emphatic with Francis Saili hitting back within seconds before a Colin Slade penalty briefly gave them a 22-21 lead.

Australia’s continuity and superior fitness began to tell with Rob Horne, Bernard Foley and Sean McMahon carrying them to a seemingly unassailable 19-point lead heading into the closing exchanges. But the select XV roared back and tries from Australian Nick Cummins and Marnitz Boshoff cut the lead to four points with two minutes remaining and though the Barbarians attacked from deep in a frenetic final passage, Australia held firm.