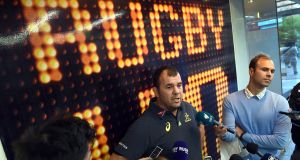 Australia head coach Michael Cheika has cut his squad for next week’s first test against England at Lang Park, Brisbane.

Reece Hodge was originally named in the squad as a replacement to injured back Harris, and the 21-year-old is again included in a trimmed down 33-man squad announced on Friday.

Former captain James Horwill is still in the running to return to Test rugby, after cutting short his honeymoon to join the Wallabies camp last week.

With Sekope Kepu on Friday signalling his intent to return to Super Rugby and Taqele Naiyaravoro announcing a move last week, Horwill is the only overseas-based player in the squad.