Saracens’ clash with Leinster in jeopardy as they face disciplinary hearing

European Rugby champions may have fielded ineligible player against Racing 92 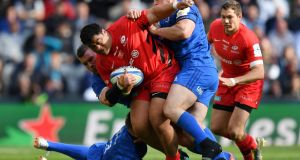 A torrid season for Saracens continues, with their Champions Cup quarter-final against Leinster in jeopardy after European Rugby announced the defending champions are facing a disciplinary hearing for potentially fielding an ineligble player.

The EPCR have brought a misconduct complaint against Saracens after the club informed the governing body that prop Titi Lamositele may have been ineligible to play in their match against Racing 92 last month.

Lamositele, 24, was eligible to play when the Premiership side announced their squad for the match on January 19th but the club told the EPCR that the American’s work permit had expired the day before the game.

Lamositele came on as a replacement in the 60th minute of the final pool game as defending champions Saracens won 27-24 to advance to the quarter-finals.

“An independent disciplinary committee consisting of Roger Morris (Wales), Chair, Pamela Woodman (Scotland) and Jean-Noel Couraud (France) has been appointed to hear the misconduct complaint,” EPCR said in a statement.

The committee will meet in London later on Friday at 6pm.

The club’s interim chief executive Edward Griffiths had also resigned late last month after the club accepted their imposed relegation at the end of the season.